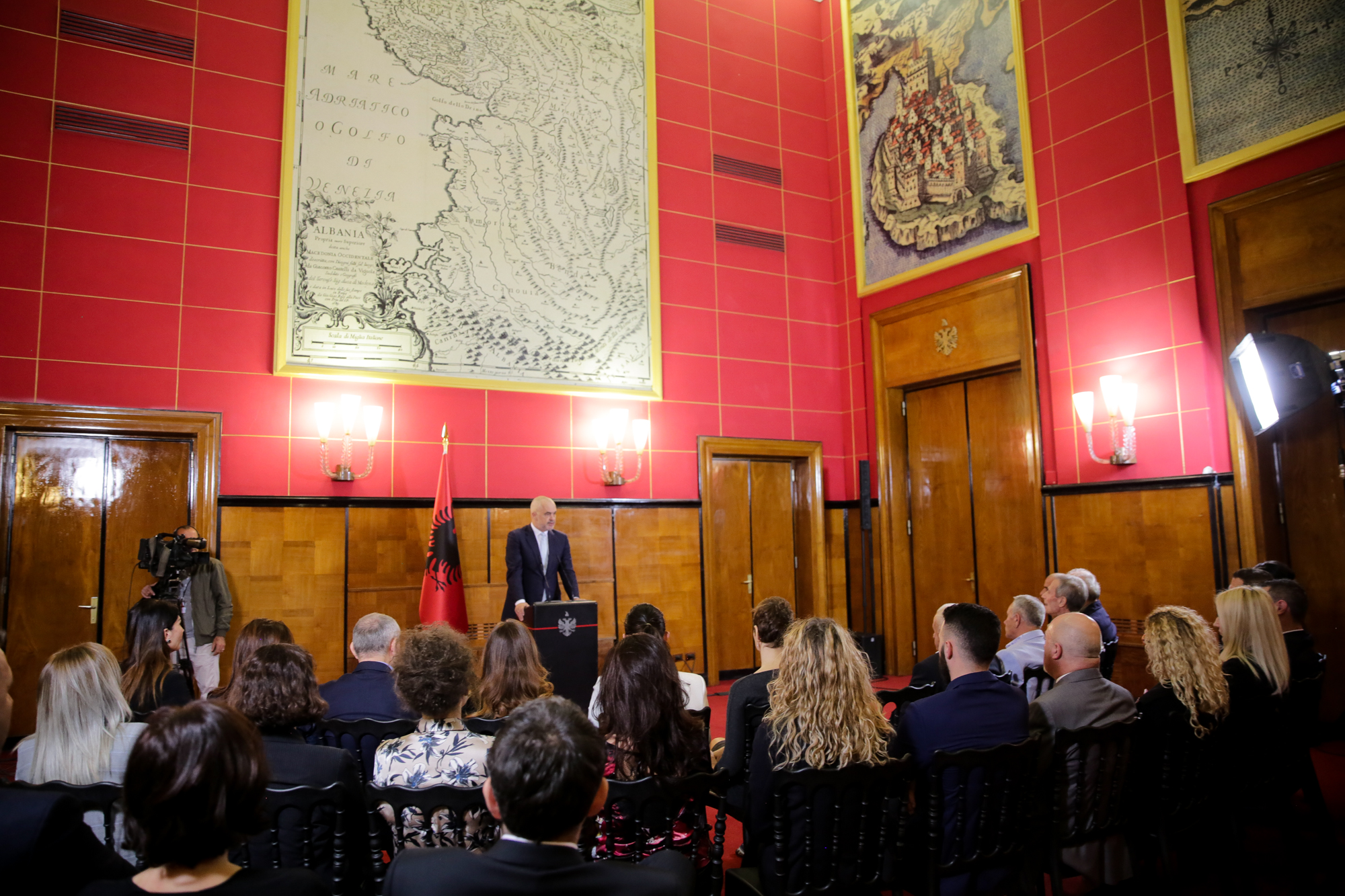 Weekly meeting at the Maps Hall at the Prime Minister’s office with ordinary citizens sharing their accounts how the online co-governance platform “Albania we want” helped them to tackle long-standing problems with the public administration institutions:

Prime Minister Edi Rama: I want to extend an appreciation to each and every one of you for attending the today’s meeting and readiness to share your stories and convey the co-governance message as a concrete message of concrete cases and examples. We are really encouraged by the fact that the number of citizens who access the Platform keeps increasing. We are also proud of the fact that we are approaching 17 thousand cases specifically addressed that could otherwise have been delayed even more or could still be dragging on today. We are very pleased that the citizens are satisfied with this interaction and above all they are willing to come here to help us in concrete terms by sharing their experiences with us.

Katerina, coordinator of the co-governance office: Pal Todri is a citizen who, after filling in the relevant self-declaration form at Tirana regional office of the Agency for Legalization and Urbanization of Illegal Zones and Buildings (ALUIZNI), addressed the co-governance platform. Mr. Todri’s case could be handled easily due to the fact that he has constructed an illegal building on his own land, for which he possesses the ownership certificate. In 2017, an official reply from ALUIZNI turned out that his application, although relevant measurements were taken, had been returned to the archive. Finally, with the complained filed with the co-governance platform, the application was reviewed and the due legalization permit was issued.

Pal Todri: I have built my family home on my private land in 1997. I have filled in the self-declaration form twice, once back in 2000 and again in 2005. Over the past 13 years, I have gone through a long and winding road of efforts to legalize the building. I would like to extend my appreciation to the Prime Minister, the co-governance office staff for their readiness and correctness in processing our complaints and forwarding them to the relevant institutions and providing a final response to our problems.

PM Edi Rama: Thank you very much for taking the trouble to come here today! Thirteen wasted years for a process that took 10 days only to complete. I am glad to inform the public too that based on the ALUIZNI data, a significant increase in the addressed cases is evident and this is unquestionably a result of the pressure exerted by the co-governance platform and the fact that awareness is constantly increasing in the public administration, being aware that everyone can send them into trouble should public administration employees fail to deliver the public services the citizens are entitled to. This pressure brings about a significant change to the relations between the state administration and the public, as it empowers the ordinary citizen. This power emanates from this platform and is granted to every citizen regardless his or her social status, despite living in center of Tirana, or in a remote area, no matter whether young or old, poor or rich, to immediately force every cabinet member to act and find a solution to every problem.

Mr. Sami Fjolla: It is a fact that I have been constantly addressing to the ALUIZNI to receive the legalization permit since 2005. On the 28th I wrote to the Platform, on the 31th they answered me and on the 2nd I received the legalization permit, but not the ownership certeficate. I am very grateful to you and to the co-governance office staff for providing a reply within 3 days.

PM Edi Rama: Thank you very much for your account! Of course, if you want the Immovable Property Registration office to grant you the ownership certificate, now you know well; don’t waste time but address to the co-governance platform immediately. One should not forget that once your case is resolved, an investigation ensues to discover the individuals who are responsible for causing these delays, and based on the investigation results these responsible individuals are dismissed from the public administration and should a corruption practice is found then the case is forwarded to the Prosecutor’s Office, or they are warned if they play a secondary role in such intolerable delays.

Fatmir, coordinator of co-governance office: The case I will introduce today concerns a citizen from Sukth village, Durres region, Mr. Viktor Beleshi, who, back in 1996, had applied with the Immovable Property Registration Office to register his property, but, despite the constant efforts over 22 years, he was never granted the property ownership certificate. Therefore, he addressed to the co-governance platform and finally, on October 25, he was provided the ownership certificate via the postal service.

Viktor Beleshi: I have applied at least once a year with the property registration office since 2005 and I have often found myself in situations where certain state offices refused to recognize documents issued by other state offices. I was provided an ownership certificate in 1996, but state offices deemed it invalid. Thanks to the platform, I filed the complaint and received a final positive response. Thank you very much. Your work performance needs no promotion as it speaks for itself.

PM Edi Rama: Indeed, what we are doing, in a way, is a kind of promotion of the product of the Platform to raise awareness among the citizens about a new innovative product that is available to their smart phones, or in the nearest local administrative unit, or the nearest post office, through which they can tackle seemingly insolvable problems, or that become insolvable because of the public administration or certain individuals who are far from being aware of their role and duties in the state offices. Thank you for helping us as it would have been inefficient if it was only me or the co-governance coordinators to address such meetings. By making public these stories of ordinary citizens, everyone can better understand and build confidence and curiosity to try at least the co-governance platform. I am convinced that even you have just thought to try it after failing to find a solution for many years. It takes only a short time and not a single penny to access the platform.

Entela, coordinator of the co-governance office: Among the cases we have tackled in collaboration with the National Employment Service is that of Mr. Vullnet Kasmi from Bratile village, Gramsh. He is the head of a family of 8 members living under the social welfare programme. But Vullnet’s wife, Mrs. Merita, addressed the co-governance with the citizens platform to seek a job opportunity for the family head. Within a short time, the National Employment Service explored all employment alternatives with private companies and today, Mr. Vullnet is hired by a private physical security service company in Gramsh.

PM Edi Rama: This case is very significant and meaningful because Vullnet’s family lived in relatively difficult conditions. Vullneti was willing to work, but no employment opportunities were provided to him. After addressing the platform, the co-governance coordinator showed commitment to help him and with the assistance of the Ministry of Finance and Economy, a job placement was found for Vullnet and now he can support his family. We presented this case today to show everyone that if they want to work, not to find a government job, but if they are willing to take up a job then they can access the co-governance platform and with the direct support from the Minister of Finance and Economy they can be found a job placement in the various companies operating in the private sector.

Adela, coordinator of the co-governance office: I am here today to introduce the case of Mr. Mirel Meta, a resident in the Baldushk administrative unit, Tirana Municipality. Mr. Meta filed a complaint with the Albania We Want platform to voice concern over the construction of a road linking the villages of Kocaj and Kakunj. Once the complaint was received, the platform informed the relevant authorities of Tirana Municipality. As a result, the rehabilitation of the road is now underway.

Mr. Mirel Meta: The case Mrs. Zonja Adela just introduced concerned a whole community and it was not the first, but the third time I accessed the Platform in question. I insisted and did not give up my intention to contribute towards improvement of community conditions. Thanks to the professionalism and seriousness of the Platform and co-ordinators of co-governance office, the Municipality of Tirana intervened to upgrade the road as soon as possible. Thank you!

PM Edi Rama: Thank you very much! We had to introduce another similar case of a mother of twins and hopefully she will join us next week. It is another case featuring complaints and requests on behalf of community. The lady was concerned that her twins went to a garden in Tirana Municipality together with 50 other children, facing a kindergarten teacher shortage. After filing the complaint via the platform, the Municipality of Tirana addressed the issue in a timely manner and, in fact, the staff of the kindergarten children increased. I take this opportunity to thank the lady, inviting her to join us next week.

Thanking you all for being here today, thanking also the co-governance coordinators for the unremitting and unhelpful work in exploring hundreds of unsolved issues and often dragged by the administration. The do an absolutely useful work.