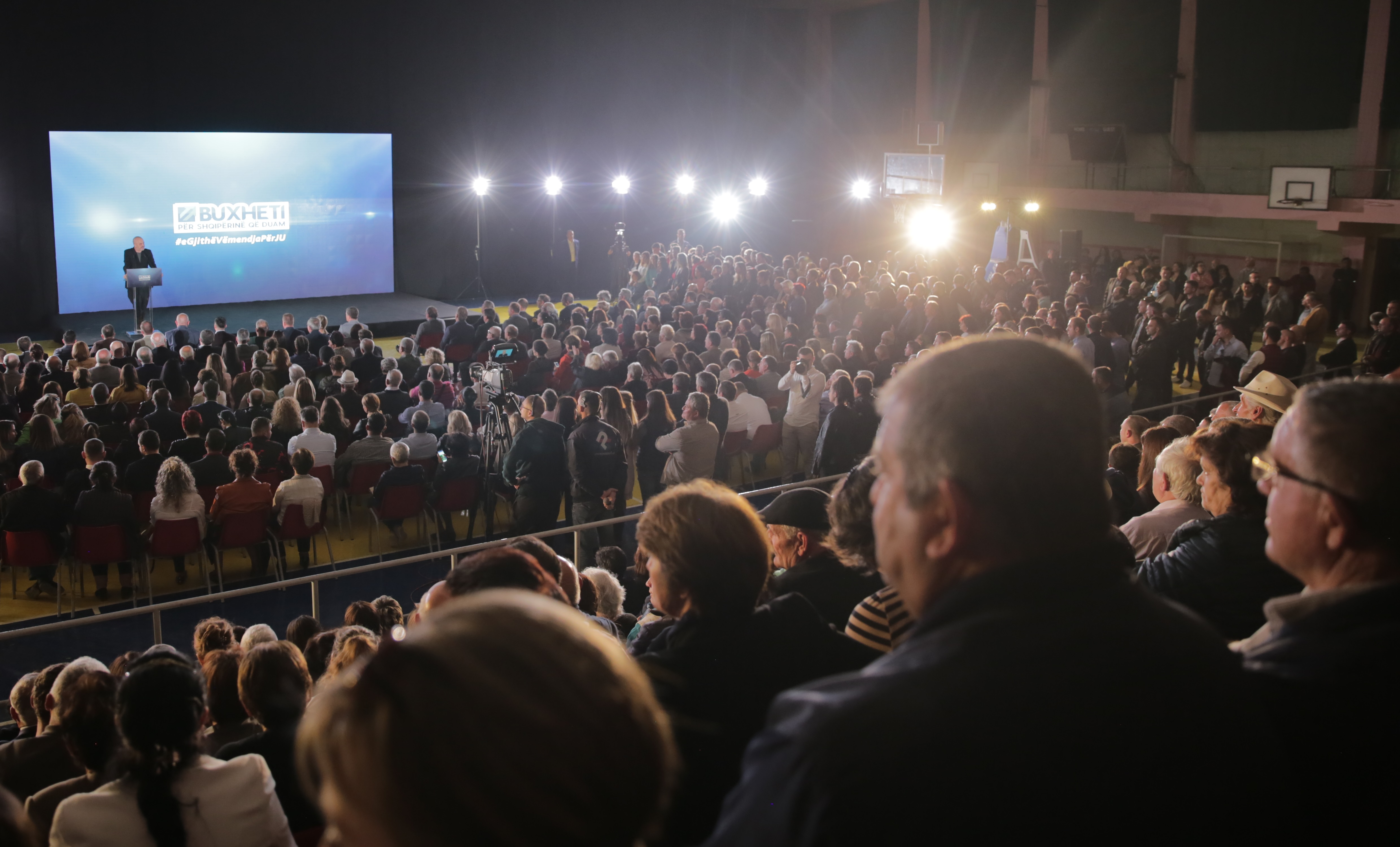 Thank you very much for showing great interest in today’s meeting agenda on the government’s plan to gear up for an infrastructure budget as part of a series of meetings we are already holding on the 2019 state budget.

As the Minister said, we decided to visit Vlora and unveil the state budget first here, since not only what Damian noted is true – that Vlora infrastructure has seen significant development over the past years – but also because one can find no better place than Vlora to speak and discus about Albania. This is undisputable!

Everyone should bear in mind that until 2013, Albanian state had entered into a dangerous spiral regarding its financial stability and what happened with the infrastructure sector was an allegory of governing incompetence but also of a great irresponsibility in relation to the future.

The truth is that with the new Socialist government taking office it became possible to avert a very dangerous course of actions that once again threatened the country’s financial stability, this time not because of the pyramidal schemes, but because of a pyramid-like conception and exploitation of public revenue and financial resources.

I want to make a clarification for all those listening to the media speculations over the Public-Private Partnership. State budget relied mostly on the external debt until 2013. Meanwhile, the today’s state budget is not based on debts, meaning that no burden of debt will fall on our children.

Unlike the ones who speculate now and who were given the opportunity to govern Albania and everyone saw how incompetent they are, we are doing two things at once: increasing the investment volume like never before and reducing the public debt each year. This is very important.

The Infrastructure Minister spoke in general terms about next year’s plan regarding the infrastructure budget. He is also tasked with running the Socialist Party’s campaigns in Vlora District, whereas I am a MP of this city and as such I have to focus on the infrastructure budget share earmarked for projects in Vlora, while Damian, in his capacity as Minister, should explore investment opportunities all over Albania.

First, we will keep investing on this basis we have already laid down that it is indeed a reflection of a radical change that will deepen in the coming year and will further deepen until the end of this term in office. For me it is very important that we will start Orikum-Llogara road and the Minister should honor his pledge to support construction of the Llogara tunnel, which, if I am not wrong, has been promised over at least 30 years.

The idea to construct the tunnel was floated following the tragic accident that killed 20 students and doctors when a bus skidded off the road and two helicopters flying to the scene crashed. It is time for the tunnel to become a reality!

On the other hand, we will soon kick off work on Vlora Waterfront Promenade extension project to the “Uji i Ftohte” tunnel and reconstruction of entire segment linking Uji i Ftohte, Radhime and Orikum.

It is essential to profoundly transform the entire area in infrastructural terms! Under the new project, the existing road along the coast will transform into a pedestrian road, while traffic will be diverted to another parallel road in a bid to transform the whole area into a true tourist destination.

Likewise, in tandem with the efforts to ultimately address the inherited and long-standing problem of the power supply, we will go on with the projects along the entire Orikum coastline, along with projects to rehabilitate Ismail Qemali Boulevard and the Skela Square, and put an end to the urban chaos around the Museum of Independence. We are the only country in the world where the Museum of Independence is surrounded by kiosks.

We are designing a project in collaboration with Vlora Municipality to turn the area into a new reference point of the city’s urban development.

Today we also inspected the ongoing works on the city’s historic center, which is gradually taking shape and will soon become a reference point in this city.

I am also very pleased new contracts have been already signed on Fier and Vlora Bypass road projects.

Work is about to start on construction of Fier Bypass road. Work will intensively start in few days from now and it definitely open to traffic by next tourism season.

The same goes for Vlora Bypass road with construction works set to kick off soon and once finished it will ease traffic in the entire area of Orikum.

Tough negotiations have been conducted to finalize the contract on construction of Vlora airport, but, as it was clearly stated at this meeting, I want to reiterate that construction of the airport will definitely start next year.

Please refrain from Facebook comments like ‘Why you didn’t start work on airport last night?” This is because I am saying the work will commence next year. I don’t know exactly when next year, but I can certainly state that Vlora will have a new airport within this term in office.

For the first time in 30 years, we have allocated a budget funding for the country’s railways, not just to support a number of people who say we work at the railway when no railways are to be found anywhere. We will start construction of the high-speed railway line between Tirana, Rinas and Dures next year and will fully reconstruct the existing rail line between Fier and Vlora, a project that will help businesses operating in Vlora port.

As for the port of Vlora; we visited the port earlier today to inspect works as part of a very serious investment there. I warned the district’s officials, as well as the Infrastructure Minister, that they will be neither elected, nor appointed to their current positions should they fail to ensure that a new passenger ferry becomes operational for Vlora passengers ahead of the next summer and tourism season.

And I am convinced Damian will consider it seriously and I wish we can all see the new ferry in place ahead of the next tourism season, most likely by March or April and the existing ferry should disappear from Vlora once of and for good.

I stated we will work for Vlora’s urban transformation. The new boulevard in Vlora will be one of the most beautiful thoroughfares in Albania once complete. On the other hand, I am pleased that, after 70 years, we are now putting an end to the practice of discharging wastewater and sewage into the sea and therefore the entire stretch of the Lungomare, or Waterfront Promenade, will finally be not only a wonderful urban coastline, as it is already today, but also a very popular beach.

The due project has been already designed and the upcoming state budget will allocate the funding to start work next year and support the project to proceed quickly in order to ultimately address the sewage and wastewater disposal problem. Meanwhile, as the Head of the Development Fund said, our ambition is to ensure that no sewage is discharged into sea along the entire stretch of Ionian Sea, as well as the whole coast of Albania.

Yesterday or two days ago, tender procedures concluded on construction of a 100 MW and EUR 70 million worth solar plant in Akerni area, Albania’s first major solar power plant, and the investment is set to commence next year once the due contract is signed, hopefully by end of this year.

So we will for first time generate green energy, without having to use water to generate electricity, and the plant will be built in the area of Akërni, right where the Vlora airport will be built too, so to become an important development hub.

I haven’t also forgotten the promise to build the new stadium for Flamurtari football club. Efforts are underway to ensure that construction work on the new stadium begin soon. The project includes the construction of the stadium, as well as a sports complex. The site of the sports complex is yet to be determined, but of course Vlora deserves a decent sports complex, just like the one we have already built in Korça, and it will be a very important for local Vlora youth and sports lovers.

One night, during a Waterfront Promenade walk, I met someone who told me: “I voted for you, but never thought you will cause so many troubles at home.” Why? – I asked him. “Because, since Lungomare was built, I never find my wife at home, but she tells me I can meet her at Lungomare.” Indeed, since this transformation began, anytime I visit Vlora, I see more women than men walking.

Our ambition is to grow the number of girls and women who go to the stadium to see Flamuraturi games. But to achieve this goal, we should build a stadium that will also serve as a kind of a recreational centre and not merely a stadium with football fans yelling and celebrating without knowing the game’s final result.

So without further ado, although a lot more projects are underway, I’d like to say that we wanted to focus on the infrastructure projects at the today’s meeting and this progress in Vlora marks just the beginning of a transformation process that will extend and deepen further, because the Vlora River road project was mentioned here, which has been actually delayed since it is funded by foreign donors and we have been forced to abide by their slow procedures. However, it is worth mentioning that the work to construct this road segment is already underway and the project is set to complete soon and work on three other sections of the road, including Selenica, will commence within first half of next year. I am confident that construction of that road project will boost employment and economy in the rural area of Vlora that offers incredible potential for agribusiness and tourism development.

My ambition is that while we start attract initial five-star hotels in Vlora, because we need extend the tourism season outside of the traditional July and August month and to this end we should strengthen not only the public infrastructure, but also the private hospitality and accommodation infrastructure, build modern conference halls that meet international standards and develop a whole set of elements that Vlora still fails to meet, despite the major transformations and the significantly improved hotels.

So this is the ambition; to increase the quality of the entire hospitality industry in order to increase the number of tourists and build a year-round tourism, thus increasing employment opportunities and revenues.

Thank you very much and we will meet again soon when we come back here to launch the new projects and that will take place not after many years, but after a few months.