Impressive results towards the target to end the cultivation of cannabis 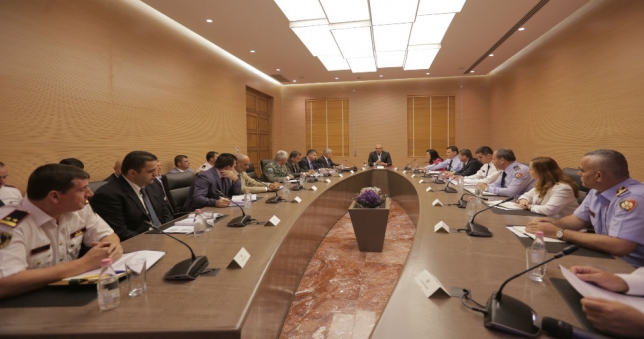 Prime Minister Edi Rama’s Speech at the Reporting Meeting of the Task Force Operational Office on the Implementation of the National Plan for the Prevention of Cannabis Cultivation and Trafficking:

Thanks are due to the State Police, starting from the Director General of Police, the Prosecutor’s Office and the Information Service, as well as to our Italian partners, thanks that in this moment are not merely a formality but an obligation for the extraordinary work and impressive results achieved in a process that is not easy at all. As we have seen before, it is clear that the National Plan, which is based on a cross-institutional cooperation, integrated approach and high operational pace, has narrowed at maximum the space, the crime action in the hot field of cannabis cultivation.

I believe that this is a meaningful expression not only of a systematic and consistent work by the government and the State Police, since the very first day we started this long and not easy battle, but it is also a meaningful expression of the truth that despite the very aggravated legacy due to the lack of state and law, the spectacular success that police has achieved in Lazarat, is already expanding throughout the country map.

It is not meaningless either the fact that from all recent reports, Gjirokastra is a zero-figure district in terms of cannabis cultivation, just as Elbasan and Korca have also reached a zero level, while across the country there is a drastic decline and figures are absolutely minimal in terms of cultivation.

It should be underlined once again what has been clearly evident from the reports made here, that cultivation efforts have now been extended to the most remote and deepest parts of the country, and the Police has insisted this year despite the dangers due to very difficult terrains, and even though it has suffered, fortunately, minor damage in terms of human resources.

We are very aware that the 27-year long cannabis presence in the country’s territory, despite the elimination of criminal cultivation networks and the deletion of this phenomenon from the map, will leave its own traces, which is a challenge to be handled separately with the utmost care and responsibility, in relation to all those people who quite naturally need an alternative in order to live a dignified life.

A very meaningful element in this process is also the reflective and self-corrective ability of the State Police which in parallel with the cleaning of cannabis from the map of Albania, is decisively carrying out the cleaning up of its ranks from the employees associated with this criminal activity. I am convinced that the determination to carry out this self-cleaning without compromise, is one of the fundamental reasons for its success.

I believe that you share with me, not the concern, but the opinion that we must go through with this process. The months ahead are potentially risky months, so we must be constantly on the lookout and keep on every moment with an intensive integrated approach of the other institutions. It is worth underlining that the role of the Service, as well as the role of the Prosecutor’s Office in responding quickly to the demands of the State Police, has been and remains important throughout this process.

I also need to commend the State Police for finally striking the public officials who have failed to fulfil their responsibilities in this area, and who have already been put in front of the legal responsibilities for not reporting this crime. There is an old article in the Criminal Code of the Republic of Albania, but it is already being implemented with determination as a clear message for all those who are directors and implicated in this activity, and who think they will get by as they have done in the past.

I believe that at the same time we must engage very strongly in addressing also a not insignificant concern of the public opinion, the most competent opinion on this phenomenon, which is about making an absolute priority the crackdown on the leaders of these criminal groups, and the seizure of their assets. The State Police has made some progress in this regard over the past 46 months that we have been in charge, but we are aware that there is still a lot to be done in the context of the crackdown on the “heads” and the seizure of criminal assets. Thereafter, considering that this phenomenon is being eradicated from the map in the form of a plant that will no longer be the basic content of this phenomenon, the success of the State Police will be measured by the impact on the criminal networks and the extent of the seizure of their assets. The first fundamental objective in this process of cleaning the territory from the plants, should be criminals first and then plants. Not plants first, and then we’ll see about criminals.

There is a second phase of the National Plan that should start in parallel, soon, with an aim to engage other institutions, from Social Affairs to Education, Health, Agriculture and the Environment. This is a phase not only for studying and providing alternatives for honest work to the victims affected by this criminal activity, but also for continuing an awareness process so that successful prevention work of the police in this key year, will be started in the mind of everyone in order to raise at maximum awareness of the serious damages that this criminal phenomenon causes not only to society, but also to every individual, and not just in criminal terms but in every respect.

The great public participation as a prerequisite for the success of this endeavour, has been very important but I believe that we should extend further in this communication network with the public. We must broaden contacts of the State Police with the public, so that they are not merely seasonal campaigns, but become lasting contacts and not just about this activity, but in broader terms.

It was rightfully underlined here that local authorities also have an important role to play. I would urge the General Director to encourage and monitor an increase in the frequency of reports between State Police leaders throughout the territory, and mayors and heads of administrative units. It is very important that this connection goes on strengthening and becoming an inherent connection, not just for cannabis, but in broader terms to co-ordinate efforts in the fight against criminality at every level.

Very sincere and not at all formal thanks for the work that is being done. It is a long-awaited and welcomed success that will give another powerful message of the Albania we want also in the international arena. It undoubtedly takes the State Police to another level, even in the eyes of the public, but also in the eyes of its enemies, which are criminal groups and all the criminal elements, with regard to which it is very important that they are increasingly conveyed every day the message that no one can play around with the State Police.

Thank you very much for their presence to the Prosecutor, the Service representative, the representative of the Ministry of Defence, and to all our friends and partners. At the next moment, following another analysis and when you are ready to report the progress of this nationwide operation, we will be here again for further information which is important to share with the public.

Thank you for your time, Ms Deputy Prime Minister, and I extend my warmest greetings to all the State Police leaders who are not here and to all the State police officers who deserve every commendation for what they are doing, as they are implementing a very ambitious and indispensable plan for further progress of the country on the path of a sustainable and healthy economic and social development, and on the path of further rapprochement to the European family.