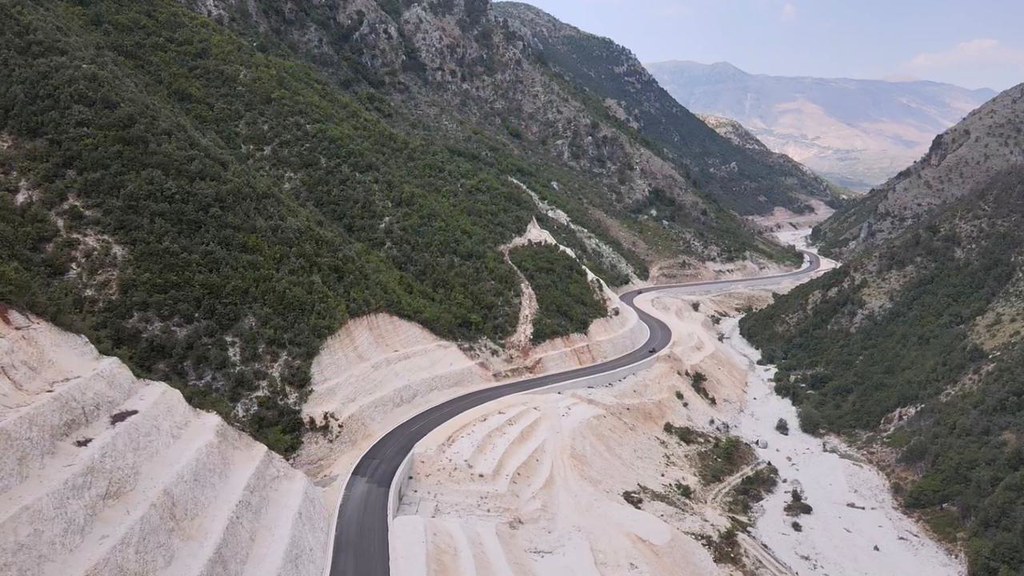 Around 75 percent of the work volume has completed to construct Dukaj-Sinanaj road linking the municipality of Tepelene with the coastal city of Vlora, southern Albania. The road was abandoned and discontinued since 1920.

Prime Minister Edi Rama, accompanied by the Minister of Infrastructure and Energy Belinda Balluku, inspected the ongoing construction work on this important road project, which is expected to boost what southern Albanian tourism has to offer.

“It is an important segment in terms of connectivity between the municipalities of Tepelene and Vlora. Work has progressed impressively. The construction work kicked off in December 2020 and around 75% of the whole construction work volume has already completed,” Balluku said.

The 14.5-km double-track road has preserved the old typical trail and its formed identity. The new road not only will ease traffic, but it will also provide the locally-grown fresh produce faster access to a larger market and provide the area connection with the tourist economy of the southern coast.

“Those who are watching us now may often fall prey to the idea that the new tourist roads are very narrow and they should be wider. The tourist roads shouldn’t actually be wider. The new tourist roads in the country are being built in line with the Europe’s tourist roads, as they experience no intensive traffic presence and provide for normal traffic circulation required to happen along such roads. What really matters is that all these roads will eventually transform the municipality of Tepelene from somehow a fake pocket into a kind of a dispatching centre for the tourists, either coming from southeast through Gjirokastra, or those coming from west through Tirana, or those who come from south through Saranda. This whole new and amazing tourist package reveals a known but abandoned part of Albania. Without taking into account the tourism and agritourism economy and livestock production. The area is famous for its most delicious food produced in the southern highland areas that were once totally abandoned and are now set to turn into the main supply centre for the tourism industry in the country’s southern coast,” PM Rama said.

Construction of the new road is scheduled to fully complete by September.

The government head also stopped over in the Upper Laberi area, where he inspected several newly-built road sections, namely the roads linking the village of Salari with Nivice, the road between Bënçë and Lekdush, as well as the road between Gusmar-Kuç, which, once the Vlora River road is complete, they will provide all the Laberi area with access to the Ionian coast.

“These projects aim at developing the whole area,” Tepelene Mayor Tërmet Peci said as he accompanied the Premier during this inspection tour to the area.

The 13-km road between Salari and Nivice is another segment part of the new road infrastructure being developed in the country’s mountainous areas. “Tourism should now be promoted here. Visitors are amazed at seeing this landscape and they are willing to return back here, but it should be promoted so that people can use this road to explore this incredibly beautiful area,” the Premier said.