Our challenge, do more and do better 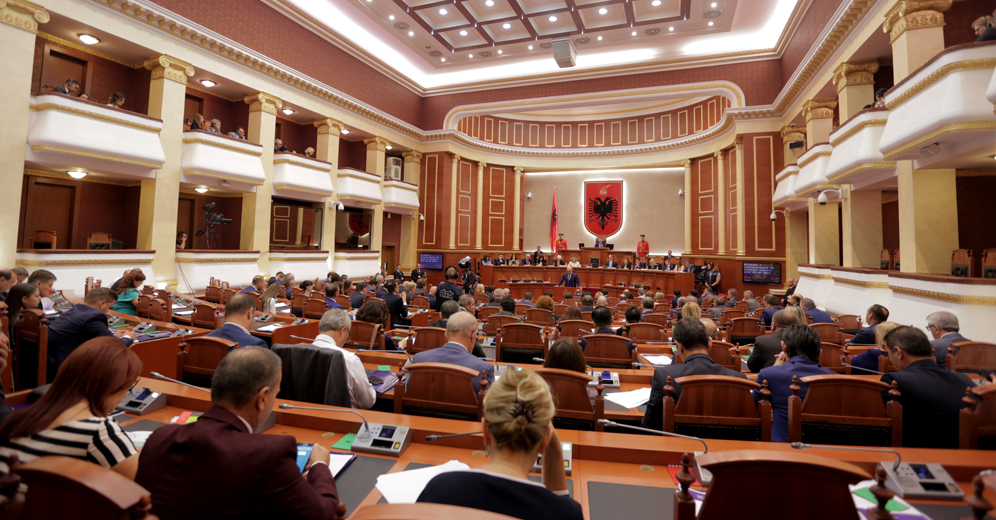 I will start off with the brutal and disgusting comments the Democratic Party chairman made at this podium against the female members of the cabinet, uttering indeed thoughtless words and which is his and their main problem. They stand no chance – for some time at least – to drag their name through the mud. Whoever has joined our government, although coming from other areas of expertise, has a unquestionable professional career and integrity, embodying at the same time everything we are, what the Socialist Party has long been and what makes the Socialist fundamentally different from any other party and that has enabled its continued renewal as platform for anyone who has ever had something to give and contribute.

I am personally an example of this way of functioning of the Socialist Party, as I come not from the party, but from the active civil and urban society. While, looking at other people here in front of me, I can state that I am not the only one, but many here are like me and we all together represent what the Socialist Party stands for; the political force that was born to be open to all of those who want to contribute to this country and has provided the professionals and public figures the opportunity to involve in politics. Just like it has provided also the opportunity to the members of its youth forum to grow together and become the face of this party. And this is certainly something we are proud of. It is what we have done, we are doing and will keep always doing, that is opening the Socialist Party to everyone who want to see their power of change and join us to enhance our joint power of change.

It is utterly clear that we are much stronger than we used to be a month ago, because we are represented by more forces here in the Parliament and throughout the country’s whole territory, where we have once again launched our preparations for another battle we will undoubtedly win. But this stage is all about how much we will take advantage of this situation to do more and be closer to the Albanian citizens and represent them much better, either in the Parliament or in the central and local government. Of course, those protesting today have never been given the opportunity to make their voice heard and respected just like it was the case thanks to us.

And they come today here and are still cherish on the idea that no justice will be done. They still keep thinking that they will continue to hinder and block the irreversible justice reform.

It is true that the January 21 events remain an open wound that has not been investigated thoroughly. Those who must answer before the law for their actions on January 21 are yet unpunished, but it’s just as true today that Albania is different from what it was last year.

It is just as true that January 21st judges have been removed from the justice system and they are no longer judges. And if they are on the streets today, tomorrow they can end up behind the bars, because new justice is not just about to get rid of those who are unworthy of being judges and prosecutors. New justice is that those who are unworthy and should be held accountable will stand accused in a near future.

Of course, who of us would not have wanted this issue to be closed and see any of these here behind bars today for the people they have killed on the boulevard. But, on the other hand, right because we are not usurpers of powers, but state reformers, precisely why we are not the ones we want to control everything, but we are those who want to put the rule of law on everyone, today we are those who need to grind our teeth and push forward with justice overhaul and other reforms.

Do you know why?

Therefore, when they talk utter nonsense they issue calls for violence, confrontation and clashes that are unacceptable in a democratic system. They think that Albanian citizens – who have 1001 reasons to demand and expect from us – will support them.

They are all concerned about our today’s decision to cancel the public private partnership procedures for Thumana – Kashar highway. They are really too concerned as it is all about a costly highway PPP. So it is a considerable amount of money we have decided to channel to public universities and the education system as a whole. What does this mean?

This doesn’t mean that the due funding is available in the state budget today. The one who took the floor before me – I don’t even want to mention her name – is “a doctorate degree holder” and the only science she is capable of is that of the fortune telling coffee cups and tell Albanians that I have only months to live. I don’t know how many months or years left to live, but one thing is for sure; they will never seize power as long as I and the Socialist Party exist.

And now I would beg to the trash media not to publish the headline: “Edi Rama acknowledges: I have only months to live.”

They don’t understand, but people understand well and know quite well whom to trust in. And it is not a coincidence that people continue and will continue to trust in us, despite of our mistakes, shortcomings, deficiencies and everything running counter their expectations from us. They have been expecting us to address everything immediately. But this is impossible. We could probably have done more. We may do more than we think it is possible to be done, but we should not deal with these (the opposition). We are not like them, but as soon as we come here, to this largest “garbage bin” in Albania, the parliament transformed into a “garbage bin” by these (opposition), we look and sound like them.

Meanwhile, the court has found the opposition leader guilty of defaming the chairman of the Socialist Party’s parliamentary group. And what do they testify in court? When the case is taken to the prosecutors, asking them to provide any evidence, they say their defamatory statements have been based on the newspaper stories. Have you ever heard this?!

And shamelessly, when found guilty for defamatory libel, they say the judges fear vetting and feel under pressure. What pressure? Because the court had to wait for the investigation to complete first.

This was the first time this slanderous man is found guilty. I asked the team tasked with tackling the defamations. More than 40 defamatory remarks made by this and the long-time DP leader who was very upset today. He is in big trouble. I can’t share it with you today, but he is in big trouble and that’s why he didn’t take the floor today. Did you see him?  I have filed some civil 40 lawsuits against them and the compensation money will be channelled to education.

Since last year, around half a million of Albanian citizens can’t afford undergoing a preventive check-up in Amsterdam, or Vienna, as these two do, and they have got this preventive examination for free but up to the standards applied in Vienna and Amsterdam, in ultramodern laboratories and under optimal conditions.

Why are they concerned over the check-up programme?

Ok, let’s cancel the check-up PPP too and let half a million of people who undergo this preventive examination each year – and their number keeps increasing – without this service. What are going to tell them? Shall we tell them to undergo the check-up and pay 81 000 lek, as these told them when in office?

Check-up programme costs are covered by the government. Of course, the service is provided by a private enterprise, which has invested in laboratories, the medical personnel and training programmes for hundreds of people. But the government covers the test costs for over half a million of people. Just like another free of charge service for placing lens was launched in the public hospitals few days ago. The service will be provided to retired people first. The check-up service is provided through the public infrastructure too and citizens pay nothing. Why are you concerned?

He claims that these people here [the cabinet members] were named by the oligarchs, while saying he doesn’t know any of them. Do you know why? Because everyone knows who compiles his party’s MPs lists, the Democratic Party’s chairmanship too. And they come here to talk about problems in the Socialist Party. But they say nothing about their own Democratic Party. “We are sorry about this big party” – he says. It is exactly like the time when Albania voiced dismay over “problems” in the United States.