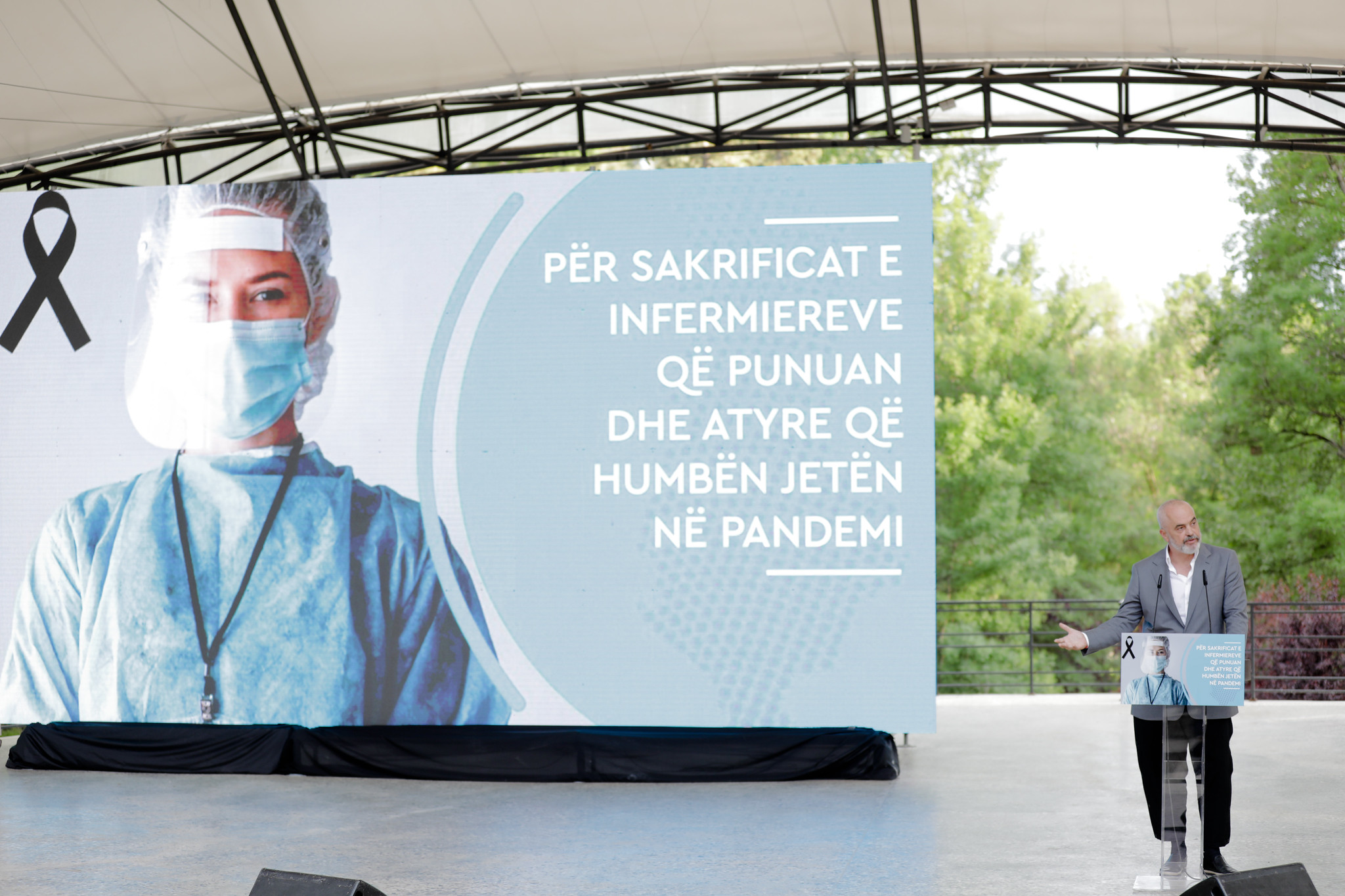 Prime Minister Edi Rama’s remarks at meeting with nurses from all over the country on International Nurses Day:

We have been continuously talking about every case of tragic loss of lives of medical personnel and health professionals and we have felt tempted time after time to offer the due tributes and respect, but at the end we have decided that the last tributes and honours will be paid to everyone at the end of this ongoing war. Hence, I am very grateful to the order of Nurses for providing us this opportunity to humbly honour and extend our profound gratitude to those who are no longer among you and also seize this opportunity extend you all the most sincere expression of gratitude and respect.

You know better than anyone else that whoever of you and every other colleague of yours, who are not here today, could have been one of those who couldn’t fight the war against the invisible enemy to the end. This definitely makes your resistance incredibly precious and relentlessness of each and every one of you in this extraordinary war of nerves, with you having left your families and being self-deprived of the normal contact with your families, just to dedicate your care to those who wouldn’t survive this enemy if it were not for your care.

Therefore, let me state from the very beginning that words are not enough in this case, but a wholeheartedly gratitude goes to each and every one of you here and your colleagues, who couldn’t join us today because of their work. Thank you very much!

Looking at the photos of your colleagues who lost their lives in this effort, I find it relevant to reiterate a commitment – that you may have or you may have not come across – I made prior to the elections day, that we will dedicate the first new government decision to those whom we wholeheartedly call Children of the Republic: the daughters and sons of all the people who have served the citizens, who have served the state and have fallen in the line of duty. And of course the children of the fallen in line of duty among medical staff will not be alone, because they will be provided with special financial support by the Republic of Albania under the new law until the day they grow up and become fully independent.

I guess it feels very awkward and believe me I have been through such embarrassment not once, when someone does a heroic deed, just like it was the case featuring a young man, also a young father of a 4-year-old child, who died while trying to save others from the flames and what the state authorities do in the follow-up to previous decisions and out of inertia that has continued years on, is hand over a certificate and entitle the family to a very modest pension.

This is certainly better than nothing, but I believe that we are better than that, and we can do more than that as a society and as a government on behalf of society. Therefore, it is time not only to honor these good people and dedicated professionals with the “Martyr” title, but also look after their children, so that the widows of those who died while performing their duty are not left with the certificate hanging on the wall and that modest pension for a lost life and also the loss of the most precious thing in life, but also a continuous, concrete and uninterrupted support for the children until the day they become fully independent.

This is the day when we should acknowledge we wouldn’t have succeeded, the way we have succeeded so far, should we were not to through our whole strength, despite our insufficient opportunities, to take our health system to a whole new level, to take our hospitals to a whole new level, to take the doctors and nurses salaries to a new level and create, primarily for our nurses, not only better working conditions, but also that indispensable precondition, you all know quite well it has been absent over the years, that is the job position guarantee; the opportunity for everyone to take up a job according to a merit-based system and maintaining the job according to the rights you enjoy.

Putting an end to a horrible story of employing and sacking nurses for reasons, which had nothing to do with improvement of the health system and care, skills and merits of each and every one of you, has played a very important role. And having  today a highly-respected army of health professionals, doctors and nurses, with nobody facing the threat of being sacked just because of political convictions, or because someone else could take advantage of influential people or by resorting to corruption practices and take the job in the blink of an eye, is an incredible asset, which has been a firm guarantee from day one of this war and which is the greatest of guarantees to end this war successfully.

I would like to reiterate today, now that elections are over, that the salary hike for nurses has been considerable, yet insufficient, and therefore we are committed to increase wages again by 40% within this new term in office, which starts in September, and we will deliver on this pledge 100%.

In order to cut it short and not keep elaborating on things that definitely deserve to be said in such an occasion and in front of an audience like yours, I would like to highlight something else too. We talk about vaccines and the vaccination rate and it is definitely legitimate to be proud of what we have accomplished, but of course we have fulfilled our duty and others would have certainly wished to fulfil their duty, but not everyone enjoys the same position in our region regarding vaccination rates today. It is really a reason to take pride in seeing Albania on top of European ranking in terms of the vaccination rate and it is also a great pleasure to see Albania and Finland being seen as the two countries with the lowest infection rates in Europe for the time being, because I believe that the words of our friend, the EU Ambassador, should be taken into account. This war is yet far from being over and we should keep doing our job.

Apart from what we have done to secure the vaccines and it is you who have delivered in achieving the current vaccination rate, because not only management, which is definitely an undeniable merit of the Minister and the health authorities, but your daily work in whole system of the vaccinators is really impressive. Discipline, correctness, seriousness and your professionalism is really impressive and you deserve my sincerest respect for this fact.

Surely, the sacrifices and hard work of the nurses are a source of energies and confidence as we press ahead with the whole process of health reforms and transformation in the country and we can count on people like you. I am awfully sorry anytime it happens that images of a very dark, heinous and disgusting side of whole this effort are revealed to the public because of certain individuals who do not live up to this mission and who do not deserve to live among the free citizens. This regret has to do with the fact that I know very well, we know very well that such individuals are not representatives of your army. We know very well that the overwhelming majority of nurses in Albania are heroes, lowly and abject humans, who dig into the pockets of family members of the patients in exchange of care for patients.

I avail myself of this opportunity to tell you and your colleagues that you should not be discouraged by the mud often being thrown at you all. You shouldn’t lose even for a single second the focus of the incredible work you are doing and you shouldn’t forget for a single second your dear colleagues who lost their lives in the line of duty. You should be proud every day when you leave home and go to work and then when you come back home, because what you are doing every day for so long for the Albanian people is historic and the contribution of each and every one of you is invaluable to the country, but it is also invaluable to your families, in terms of pride and in terms of the brilliance of the name you inherit from your parents and will pass on to your children.

Albanian nursing service was actually founded at the height of the fight against the Spanish flu, though history of nursing has its origin a bit earlier. But what made me smile when learning about the fact that this service was actually founded by women. And I am often told why I keep saying that Albanian men would have run down completely if it was not for the women.

Women were again at the forefront of the fight against the malaria, cholera after the war.

The women in the Albanian nursing service, in spite of all due respect for men – I, too, belong to this category since, unfortunately  I am a man too – and I would like to conclude by extending special respect to all the women and girls who are here today and those we are not. And I am telling you in advance that you would now see me being quoted by the media as saying: “I don’t want to be a man.”

PM Edi Rama was also presented with the Certificate of Gratitude by the Order of Albanian Nurses during this event.

PM Edi Rama: With your permission, I would like to decline this certificate. I would refuse it, because I don’t deserve it, but since you don’t want the President of the Order of Nurses feel embarrassed, I will offer you a compromise. The Certificate will stay with the Order of Nurses for now and I would receive it once your salaries are increased by 40%, so that there is a reason for me to deserve it. I am saying this because it is unfit for me to come and show respect and humbly bow in front of you, and yet be the one who is awarded the prize and be praised. And I would rightly end up as a character in the ‘Portokalli” cabaret show. And I don’t absolutely doubt you have been thinking sincerely about presenting me with the certificate. I wouldn’t receive it, because I just don’t deserve it and I am really sincere about it. It should in no case happen that I come here to honour you and again be the only one who receives every praise. This is not convenient. Therefore, I would leave the certificate be staying with the Order, while I will accept the lamp as a reminder for me to show up again and receive the certificate only when the nurses wages are increased by 40%.