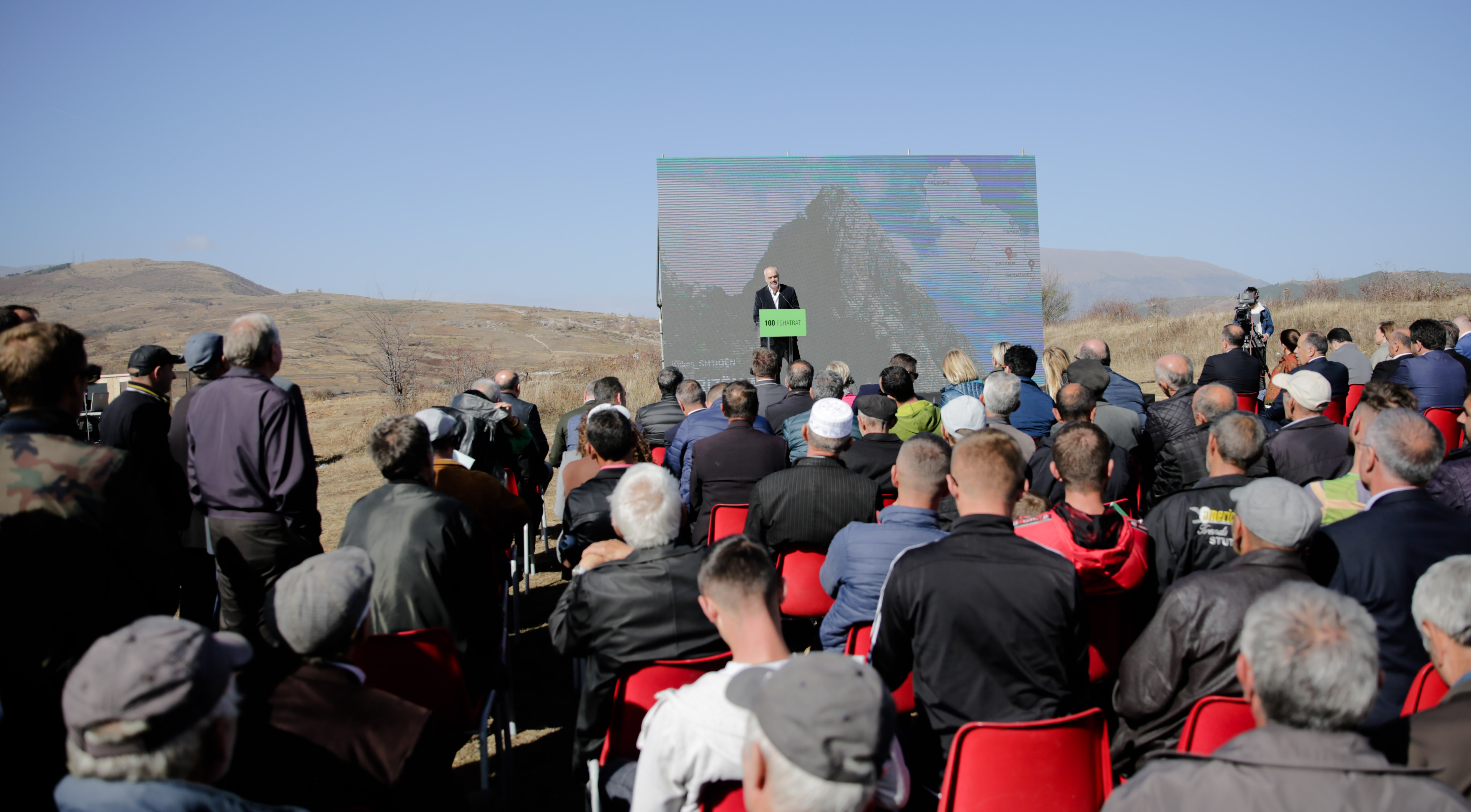 Prime Minister Edi Rama’s remarks at meeting with local residents in village of Shishtavec, part of the selected 100 villages for the Integrated Rural Development Program:

I remember the last time I travelled to Shishtavec on a bumpy and highly dangerous road. I am very pleased we have kept our promise to completely rebuild the road and we travelled to here today driving on a road that meets normal road standards. Of course, this is not enough, on the contrary, the road represents a first step to open up new and real development prospects.

Two years ago, a Polish visitor, who had stayed one night at a guesthouse in the area below the “Guri i Mëngjesit”, a natural monument in Shishtavec on which the morning sunlight fall, wrote that the area is not just a tourist attraction, but a lot more than that, because it could be only you, completely on your own amid the high mountains without no one else around. Such attractions like Guri i Mengjesit in Shishtavec are to be found in countless numbers all over north-eastern Albania.

For many years, also because of an earlier tradition, the tourism development model in the country has been based on seaside summer holidays. We have always thought and believed that tourism development was associated with the seaside as the largest tourism potential. However, we are all increasingly figuring out that in the ever growing number of foreign tourists who visit Albania – with the majority of holidaymakers certainly heading in greater numbers to the country’s beaches – a constantly growing category of visitors are choosing Albania’s mountainous areas because of the important attractions in the remote areas of the country.

This is a tremendous challenge as tourism development is the best way to lift these areas out of poverty. Tourism is the best way to invest savings by all of those who have chosen to emigrate to create an opportunity that they were never provided with over many and many years, but still bend eyes on their birthplace and are willing to invest in their homeland as soon as an opportunity is given. I am pretty confident we will see the first models of mountainous tourism develop in this area also because of the fact that works to construct Kukes airport are set to begin next year.

The existing airfield will completely transform into an airport that meets international standards for low cost flights. A study we have conducted with the assistance of foreign experts has encouraged us a lot and has made me very enthusiastic as the professional methods of predictive analysis show that an average of 300 000 passengers will pass through it each year.

Imagine what it would mean for Kukes that over 300 000 people depart and arrive here through this airport.

I was discussing with Safet about this and he said that bars and cafés in Kukes will sell 300 000 more coffees, meaning that consumption and investment will grow significantly in Kukes. Moreover, what’s worth of today’s meeting is that the airport will make it much easier and represents a great opportunity for the ambitious project introduced by two local residents together with several Slovenian investors and specialists to turn Shishtavec into a major tourist destination and skiing resort. The airport will make this project a dream come true.

Suffice it to think that all those people who would wish to come to a skiing resort today, even such a resort was already built, they would have to fly first to Prishtina, or Tirana and then drive to this area.

We already know it and it is clear to everyone who follow the developments of the tourism industry, either the seaside or mountainous or adventurous tourism, that any destination located more than 60- minute drive away from the airport becomes less preferable to the holidaymakers, who are less willing to travel long distances to arrive at their destination. Although, I repeat, this is not always the case, apart from the airport, the project you are about to see will lead to a major transformation of Kukes region, as well as the country’s economy.

Shishtavec is one of the 100 villages in the country selected by the government to have their infrastructure upgraded and where boosting agritourism, transforming houses into guesthouses, or construction of small hotels in your own land plots near your farms that will provide organic food supplies to the hotel is our priority. The 100 Villages programme represents an ideal opportunity to invest remittances and accumulated savings abroad and to make a profit enabling everybody that makes an investment to earn in a year more than they do with their current jobs abroad.

I would invite and urge everyone that if they have an idea, a project they just need to address us as we will decide to make more funding available to agritourism next year and I am not talking about bank loans, but cash money that is directly provided to any individual who wishes to implement an agritourism project. I am talking about cash money with the government directly contributing by providing support for a private project, a household and an investor project, a project presented by a Kukes resident currently living in London and wants to turn his father’s home into a guesthouse, featuring all agritourism elements, local food and traditions.

I invite everyone to explore this opportunity, moreover, given that we have cut taxes to minimum rates. We have cut the profit tax rate to only 5% and VAT to only 6%, exactly the same rate levied on the 5-star hotels. The same tax rate will be applied on investors building a 5-star and a household turning a private home into a guesthouse.

That’s why I want to encourage everyone living in this area, which, we believe, has tremendous development potential for winter sports. The area has an early and long tradition in skiing and it has been a ski holiday destination since the World War I. Archival documents show that the area has hosted ski racing in the period between 1914 and 1918. The area up there is a blessed one snow-capped mountains and hills for most of the year. We have already learned that ski resorts are populated both in summer and winter, as they offer stunning landscapes and nature, fresh air and fantastic relax to everyone who doesn’t prefer the seaside. Austro-Hungarian ski-equipped troops were deployed to Shishtavec and they exercised and organized ski racing exactly in the area where the new ski resort is projected to be built. Since that initial influx of skiers, local residents started to improvise their early wooden-made skis. Likewise, the Shishtavec’s Morava sports club was founded in 1944-1945 and the club was the school of the next unmatchable champions, since not everyone in the then Albania used to exercise skiing.

We are deeply convinced that Shishtavec’s inclusion in the 100 Villages Programme, inclusion of the ski resort project and the Shishtavec’s masterplan – thanks to the 100 Villages Academy that comprises 22 hard-working and committed teams of architects, professors and urban planners – are a guarantee that, sooner rather than later, we will see important developments in this aspect.

I want to invite each and every one of you to apply and join this programme.

Of course, projects are needed in order to become eligible for the funding. The programme is clear. The Agricultural and Rural Development Agency has developed an information plan. The Ministry of Agriculture and the relevant regional agriculture directorates will lead the information process on the programme in order to ensure that as many people as possible are clearly informed and know quite well where and how they can direct their application to receive funding under the programme. But investing in agritourism is the simplest and the safest way in terms of returning investment; investing to transform a private home into a guesthouse, turning the traditional hospitality into an asset, transforming the traditional cuisine into an attraction and creating a household economy, which, as experiences in other countries have shown, is an economy to lift anyone out of poverty.

We will provide support to anyone who says I am ready to transform this house into a guesthouse.

Every calculation shows that an immigrant, who breaks his back working abroad, should he invest his savings in agritourism, in these natural wonders, he will make a profit and earn in a year more than they do with his current job abroad. I am not saying that everyone should come back and engage in this business, but they can try and will see the results for themselves. They will understand that it is better for them to invest their savings here in Albania, invest in their own homes in the countryside taking into account everything I mentioned earlier – opening of the airport, fundamental transformation of Kukes from a transit area to reach other places into an important destination.