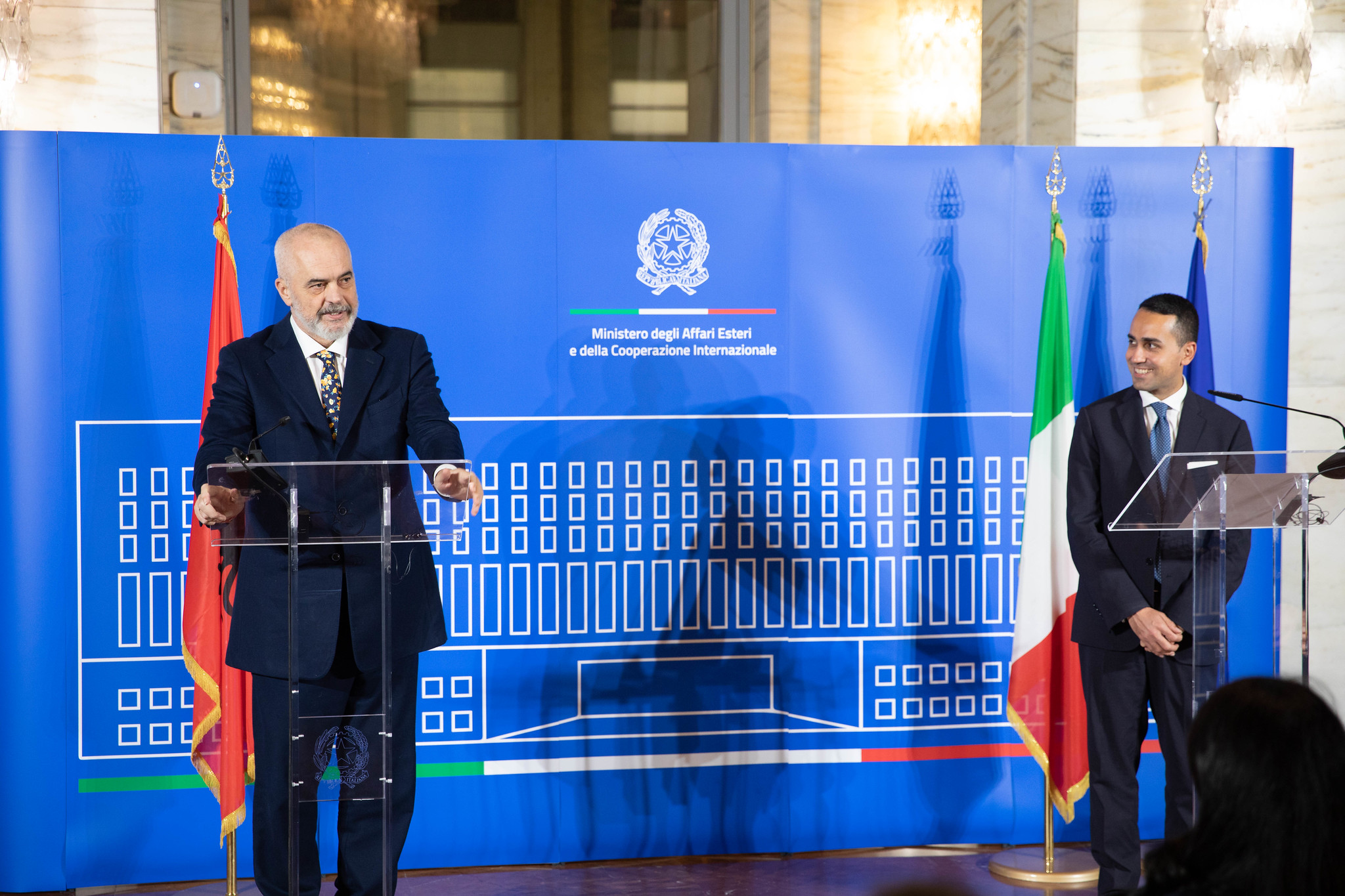 PM Rama and the accompanying delegation were also received by the newly-elected Mayor of Rome Roberto Gualtieri.

Italian FM Luigi Di Maio: First of all, I would like to thank Prime Minister Edi Rama, the cabinet members and the whole Albanian government delegation with us here today.

Together with PM Rama we co-chaired the inaugural meeting of the Joint Standing Committee on social and economic cooperation between our two countries; we already launched on the occasion of my visit to Tirana a year ago.

I would like to thank the colleagues involved in this process, namely the Minister of Infrastructures and Transport, Enrico Giovannini, and the Ecological Transition Minister Roberto Cingolani and their Albanian colleagues.

Our goal is to further strengthen our ties so that we can take another quality step regarding cooperation between the two countries. This strategic importance does not originate from the ties between our two countries, but also from the sense of belongingness to the European Union.

Therefore, I would like to confirm Italy’s support for Albania and the Albanian people on the path towards membership in the European Union. We support formal launch of the accession negotiations before the end of the year.

This would send a message of trust and optimism to the entire Balkan region. The exchange we had at the Committee meeting today was very fruitful.

I would like to thank all the colleagues for the proposals they have forwarded. Our objective now is to make our ideas operational in the coming months and to this end today we agreed on an action plan designed to deliver on the commitments we have made in all strategic sectors; infrastructure and ecological transition.

Several significant perspectives of cooperation in the infrastructure sector were singled out. It is all about structure and modernization that PM Rama has already launched and we as Italians want to be protagonists in their implementation.

In this regard we can rely on the presence of Italian companies operating in the Albanian market, contributing to employment and economic growth.

I want to remind you that Italy is the top supplier, Albania’s primary trade partner and this makes us very proud. The topic on ecological transition and the importance of Italy’s interventions in this sector, thanks to Cooperazione Italia, the presence in the Albanian market of many Italian entrepreneurs, and the perspective of integration through the Albania-Montenegro interconnection line leads us in this direction.

The outcomes of the Glasgow climate change summit reaffirmed the need for us to place high priority and paramount importance to cooperation in this sector, both at a national and European level.

In this regard, Italy and Albania could take a leading role in the Western Balkans also through the economic development plan launched by the European Commission and thanks to the developments because of all involved stakeholders.

Thanking again all the participants, I would like to give the floor to Prime Minister Rama.

PM Edi Rama: Thank you Minister! Thank you dear Luigi that at such a significant conclusion of this day, the meeting of our joint committee, where we had the opportunity to go over concrete issues, concrete actions, and identify concrete paths on directions of mutual interest and I am very pleased for this day.The day began at Palazzo Chigi, at the Prime Minister’s office and went on latter with the bilateral meetings of the cabinet members and the participants, but who actually represent several important pillars of the cooperation between Italy and Albania, including justice and security, to conclude then with this joint work that I am really confident it will yield concrete fruits next year and  I very much hope and look forward to being part of this together with others. We will welcome you and all cabinet members involved in this process to jointly keep pushing this work forward within this Italian week, we are seeking and planning to host next June. I don’t want to go over details so that I don’t take more time of those who have been following and assisting us throughout this process also by taking notes and helping is before and after the process, as the excellent Italian Ambassador to Albania did, who will hopefully not leave Albania without obtaining the Albanian passport at end of his tenure, just like another friend also did, who stands today, so to say, at the higher storeys of this building.

Thank you Luigi, thank you Fabrizio. Thank you all and I look forward to seeing you in Tirana soon. We will immediately start working on these projects, ranging from railways to projects on the maritime economy, infrastructure and energy projects, agriculture, ecological transition, tourism, culture and of course, without forgetting what we said before about these pillars that have always characterized as very important common points our cooperation, security and justice.