Albania in the EU, impossible? Then let’s make it a reality! 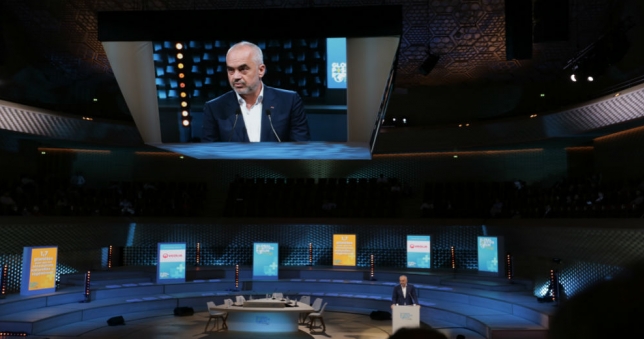 Following the speech of Prime Minister Edi Rama in the Forum:

It was a year of elections, in my country as well as in your own. In mine, my party and I won.

In yours, it is the world that has won. How many millions of people across the world would have felt differently if this great land of freedom, fraternity and equality had yielded to the policy of the extreme right? So, the French people gave us hope, and gave your President the enormous responsibility of leading your country in these difficult times, just as the Albanians have given me that responsibility.

We live in a world facing problems and challenges, but the right to lead is among the greatest privileges that the people can bestow on an individual.

That is why I begin each day asking myself these two fundamental questions:

– Am I helping my people and my country to meet these challenges?

– Am I helping my people live and lead a better life?

It is not easy.

But these are my guiding stars.

At the heart of it all is the economy, and I was very pleased when President Macron and Jacques Attali asked me to share with you today my vision of the positive economy.

What do we mean by “economy”?

We mean the people.

We mean the entrepreneurs who have ideas and realize them, who create jobs and fulfil the wishes of others.

We mean the governments laying the foundation to support growth and create jobs and wealth with tax systems that make an appropriate investment in the public good, schools, hospitals, roads, the police and the military who fight crime and terrorism and make us feel safe.

So you see what I mean by “at the heart of everything”.

Everything that affects us.

Everything we want for the future.

Put two economists in a room and, without delay, they will disagree.

But in my position, at the top of the government, with so many ambitions for my country, so much desire for the ambitions and talents of our people to be accomplished, what do I consider as the most important element of modern economy? – It is the know-how.

And this occurs in a world defined by the pace of change, not only with regard to what we now know, or think we know, but in a world defined by how we see the world change in the future and how we adapt to it. It is difficult for our children to imagine a world without mobile phones and with no internet. Just as it was difficult for my generation to imagine a car-free world – albeit in Communist Albania it was easy to imagine life without having a car, but at least we knew that they existed!

So with the next wave of automation, robotics and artificial intelligence that awaits us, how can we seize opportunities and manage threats?

Because, as technology advances, the knowhow becomes more complex, it is possible to imagine what is hitherto unimaginable, to make it real and to make it work for the people.

As the great Nelson Mandela said in a very different context that was that of his country’s long struggle for freedom and against Apartheid, “it seems always impossible until it is done.”

Flying over the ocean was once impossible, until it was done. Telephoning from the other side of the world; exchanging billions of dollars in one thousandth of a second; landing on the moon. There are many impossible things, many unimaginable things. Our history is full of them, and so will be our future. It is up to us to know how we shape it.

In knowhow-rich societies, each person has mastered only a part of the collective knowledge, and young people work productively with others on ambitious projects to create complex societal achievements. In poor societies this is not the case.

In this unstoppable development path Albania has seen more roadblocks than most of the others. Disconnected from the rest of the world for almost half a century, it took us a long time to make ours ideas that had spread naturally in other countries.

When the walls of the communist isolation regime fell, one in three Albanians left the country. Already impoverished in terms of contacts with the rest of the world, suddenly we found ourselves impoverished also in terms of the labour force we needed to bring our country into the modern age. It was therefore a difficult journey.

It was a problem when everybody left, but today the diaspora is one of our strengths. We are very proud of our compatriots who have distinguished themselves abroad in the arts, humanities, science and technology. They are the best connection we have with the world. Many of them have returned home and allow us learn from what they have learned.

Let me give you an example:

You all know the enormous financial crisis in Greece. Many Albanians went and worked there.

As their work diminished as a result of the crisis, many returned home. In just four years, our workforce grew by five per cent!

Now, to come back to the story of the two economists arguing in a room, I can assure you that at least one of them would say that this would inevitably lead to a wage depression and a higher rate of unemployment because you would have more of people competing for the same type of low-paid, low-skill jobs.

But do you know what happened? The Albanians who worked in agriculture in Greece and knew how to work greenhouses, developed their own lands once they returned home. We did not have greenhouses until recently. And these new agro-entrepreneurs worked their lands and then began to export their own products.

Many other Albanians in Greece worked in tourism and therefore they have acquired a knowhow in this sector. Suddenly the number of hotels and restaurants started to increase in Albania. Instead of the depression that we feared so much that could be triggered after the Greek crisis, we saw an acceleration of growth and investment, an increase in employment. So, the positive economy is this positive accumulation of human capacity to generate prosperity and welfare thanks to change and the transfer of the knowhow.

Beyond the Orthodox political debates on the economy of supply and demand, the initiative of individuals and companies should be at the centre of the positive economy and this is always impossible until it is done. Albania should no longer represent corruption and criminality, but creativity and innovation.

Impossible? Let’s do it then!

I know we can because change is already happening.

It is clear to all those who go to Albania, but also to others that we need you to help us orient in our strongest points so that the old image is replaced by a new image, and people see us for what we are and for what we know we can become.

Albania in the European Union? Impossible, are you sure? Let’s do it then.

And let me tell you why I want this to happen, why I think it will be good for Albania and for Europe as well.

Historically, we have lived in very small human units of tribes and hordes, and slowly but surely, we organized ourselves into nation-states. The building of nation-states was intended to overcome enormous challenges because often these territories were composed of people with different identities, ethnicities, languages and religions.

Anyone who knows the history of the Balkans knows this has been particularly difficult in my region. We saw in the Yugoslav wars of the 1990s the extent to which this was a real challenge. The resulting post-Yugoslav States, however, have become stable and peaceful states. Let me tell you that today, Albania and Serbia have many more things that unite us than the things that divide us, even though it seemed impossible until recently, when I became Prime Minister a few years ago.

One of the things we share is trust in EU values and the desire to be part of it. Once again, as I have said with admiration and humility, I do not believe that humanity has ever recognized in its history a more ambitious economic and political program than the EU.

The process to get here has been troubled, it has overcome major crises and has known many ups and downs, like Brex at this time. At this moment we are at a low point, but the European project has not been interrupted and will never be interrupted, I believe.

There are many areas of the world that are much less diverse from a linguistic, religious or ethnic point of view than European countries, yet they could not reach the level of integration that Europe has been able to reach.

In South America, there are 19 countries that speak the same language, 27 Arabic speaking countries in the Arab World, but the level of integration, political and peace union that we have achieved in Europe is much better than in all these countries, although they are much more homogeneous in the cultural viewpoint.

We want Europe, we want to belong to Europe and we want to continue to contribute to the growth of this incredible success that the EU represents, and by saying this I do not mean only the Albanians, but all the Western Balkan countries.

Brexit or not Brexit, I believe that it is us, the Western Balkans who are on time with the march of history. We are surrounded by the EU states: Croatia, Hungary, Romania, Bulgaria, Greece and Italy. We are 6 countries in the heart of Europe, culturally connected to the world around us, countries with which we aspire to have a more intense exchange and a larger and stronger union, with which we can interact, from which we can learn and to which we can contribute.

To conclude, I would like to say that if there is a positive revolution that can happen, it is the revolution that should allow all the children of this continent, whether born in France or in the Balkans or elsewhere, to be one more tile on the roof of the EU. If for our countries there can be a Europe that walks at different speeds, our children should have a single Europe walking at the same speed for all of them!

Earlier, the Prime Minister attended the premiere of the movie “Transition: Art and Power in Albania”, featured at the Pompidou Centre in Paris. During the greeting speech, Prime Minister Edi Rama emphasized that these promotional activities are an important evidence of the friendship among countries. “This evening, the time we are sharing today, is a very important testimony of your respect and affection for our country, a country that needs above all to have friends, and I hope we will continue to make other good friends, thanks to all of you who are the best ambassadors of this friendship.”