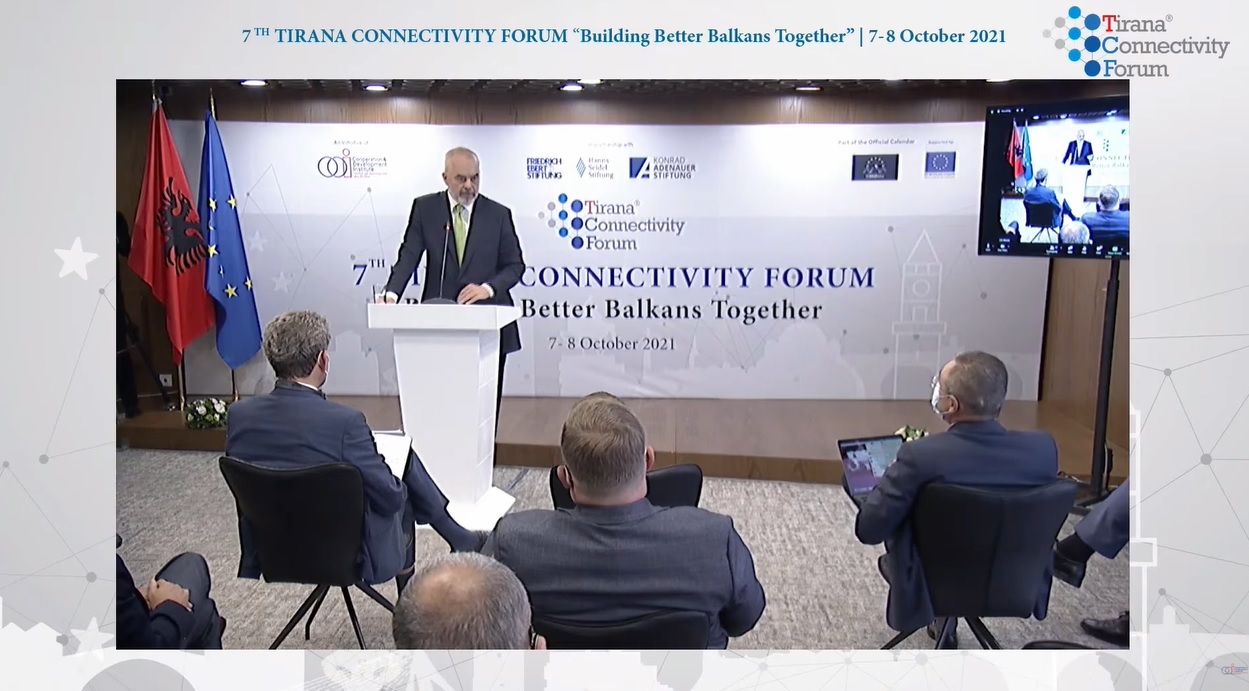 Thank you and greetings to everyone watching us from distance. I see Fleckentein, who has been appearing on the TV screen all the time since the most recent election win in Germany, although they have to form a government yet, but I would urge all sides to be constructive, just like you used to advise us when visiting Albania.

I am very pleased to be here today – as the host noted – just a day after the EU-Western Balkan Summit in Brdo, where we had the chance to share with the 27 EU member states and other five Western Balkan countries our opinions on the current situation, of course, not only about enlargement, but on the overall challenges that are becoming increasingly interconnected.

I think it is becoming steadily obvious that enlargement is a word being less and less used with the passion and willpower with which it was used years ago and there is no doubt that the process can take a long time.

In the meantime, it is quite clear to everyone that the Western Balkans is a reality increasingly important to the EU and I think this is also another reason why some of the Eurosceptic countries seem to be somehow more open to the idea to push as much as they can within the short term that has remained under pressure from all sides of the EU due to the populism of the far right and other similar movements. None of such movements are in power in any of these countries, but it is obvious they are steadily influencing many moderate EU governments.

Of course, this is because of election reasons, in most of the cases. And by the way, during talks I have come to learn a new technique to find out about developments in a near future by looking at the elections calendar. So, I would suggest everyone that if you want to somehow learn about the kind of attitude of some important countries, look at their election calendar and you will understand, there is quite a big harmony between our and their needs to reach out to their voters vis-à-vis the EU enlargement and integration process.

Having said all this, my self-consciousness and awareness about the Western Balkans’ geopolitical importance is higher than ever and, secondly, for the very reason of protecting Europe primarily from illegal migration, the Bloc is constantly bringing at the table the common belief that BP should be further supported in the transformation process.

One of the most important instruments the EU and the European Commission have identified as an engine to push the transformation machine forward in the Balkans is the so-called Balkan Economic and Investment Plan, which is quite ambitious, very challenging, as it is about a significant amount of money and it is about capacity not only to anticipate, but also to work together on the EU-funded projects to build stronger infrastructure interconnection, railways, digital interconnection and interconnection of energy networks.

So, we are somehow aware of the situation and we are seeking to make the best out of this situation. As I already stated a day ago, if the EU is not going to keep its word on enlargement and if it would be impossible for the Western Balkans to join the EU, then the EU’s objective should be reaching out to the Western Balkans through a more sustainable and uniform way through joint actions. And these are two kind of actions, first, joint actions to deal with common crisis, hoping that, without repeating the dramatic start of the response to the pandemic when the Western Balkans were completely left out of the vaccine distribution scheme; the energy crisis, which is hitting many EU countries hard, in essence, the countries dependent on gas sources just like Europe as a whole, and they know well that Europe is around 95% dependent on the gas not produced within Europe, but it is provided to Europe through other destinations.

The connectivity map is clear. It has been designed for some time now, while funding and delivering on operational processes for the implementation of what has been agreed upon regarding this map is a huge challenge.

It is really a big challenge.

I keep insisting that the Open Balkan we provide us an additional and more efficient mechanism to promote the capacities we have in order to deliver more in this regard.

But the Berlin Process alone clearly has a problem. The problem is that the authorship is outside the Balkans, which means that despite the goodwill of any outsider who is involved in the Berlin Process, actually has much more to deal with in their daily life and cannot focus on the Balkans only, which is something we can and should do. It is practically the same as a project implementation unit. Donors contribute with funding and projects, but they always need the project implementation unit in order to follow through with the implementation. So the Open Balkan is the implementation unit of the Berlin Process. It is as simple as that. It is as inclusive and much comprehensive as the Berlin Process and it is certainly open to improvement… (inaudible). It is not a process that affects or disturbs the Berlin Process, but it is a process requiring implementation of the 4 freedoms. Because, let’s suppose we have best possible infrastructure in place, but we won’t be able to make the most out of what we invest financially unless there is free movement… [inaudible], and, on the other hand, what we invest financially, due to this plan’s nature, it always depends on the capacities and performance of more than one country alone. Every road, every road segment, every railway segment, every digital segment or whatever we do, in an interconnected energy network, cannot be built in a fragmented way and cannot be separated from the other. If we build a highway or a railway stretching from point A to the point B and we lack connectivity in compliance to the very same standard and a shared goal, then building it would be meaningless.

To inform you, we are seeking to push the Adriatic-Ionian Corridor forward and by the way, we are currently engaged in a somewhat solo exercise, while the years go by and the project is far from being ready in terms of involving countries that are supposed to share this connection, namely Albania, Montenegro and Croatia. To this end, we are seriously and thoroughly prepared for an investment, which should secure funding through direct contracts on roads, which means toll roads. So we need to build the corridor, but to have an alternative solution for everyone, so not only the corridor, but also an alternative for the roads.

Finally, we are about to witness the start of work on construction of the Tirana-Durres railway, which has been a long process. I would say not even a usually long process, but even more than that with the EBRD for reasons that have not been easy to understand, and yet finally things are fine and we can start.

We currently need to build railway connection between Durrës and Montenegro, because otherwise it does not make sense. On the contrary, the connection of Durrës with Hani i Hotit and then from Hani i Hotit with Montenegro will further spur trade. At the same time, we are certainly interested and we look forward to working on the Durrës-Pristina railway and then connect with Nis, which again brings all the investment in a wider network, not only regional, but also in a European one.

Third – I am not including it on the priority list, but all these three projects are very important and we should push them forward as soon as possible – next is the segment between Durrës and North Macedonia that will again be meaningful for the region and will be very important in parallel with the work we have started on the new commercial port of the city of Durrës, which will be larger, way better and much more decent from the environmental point of view compared to obsolete infrastructure that we had, that we have and that we still call a port.

This was about the railways and highways, but of course we hope to combine the Durrës – North Macedonia railway with road infrastructure projects, but this must be done after overcoming some obstacles in the current situation.

The other side of the story is certainly about the digital connectivity and the efforts to boost capacities domestically to open new horizon for the young people. We have many talented young people, as in any country in the region, who need to be accompanied through a comprehensive and inclusive way of introducing them to the digital world. We plan to overhaul the IT curriculum in our schools to usher in a new era, because the old-school labs and teaching fails to fulfil and deal with the nowadays challenges. We will also commit financial efforts to support coding and programming so that as many young people as possible involve in coding. Work is underway at the Pyramid to transform it into the largest technology centre in the region, but it is not going to be the only one. We are also working on building such technology centres in Vlora, while such centre has been already built in the city of Korça, where the new library provides for a small but very nice space that is becoming increasingly larger. We are seeking to do the same thing in Durres, Shkoder and other municipalities in a near future.

This is also accompanied by the need to go hand in hand with increasing investment in human capital through a new approach to universities.

Not wanting to take more of your time and hoping that what I said, I know is not new to you, but I hope it has been useful, I want to conclude being convinced that despite the fact that the European Union has not been able to keep its word on the integration process and this time because of something that was not at all foreseen, such as Bulgaria, I am reasonably optimistic because I strongly believe that the sense of community among the European Union and the Western Balkans is growing among leaders in Europe and the sense of responsibility is also growing towards the Western Balkans. I feel that there is a greater understanding of the importance of the Balkans, for many reasons, for the future of Europe. Not just for the future, but also for the present.

I hope this was helpful to you.