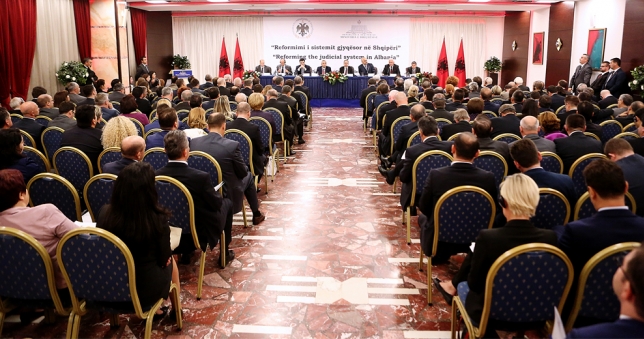 Speech of Prime Minister Edi Rama at the forum “Reforming the judicial system in Albania”:

I believe that, if we looked at the graphs showing the development of life in this country in 20 years, a graph that would without any doubt make a big difference from the others, would be the graph of justice and of the perception of justice by the public.

There is not the slightest doubt that, anytime Albania is referred to by our partners, anytime it is referred to by foreign columnist or analysts, anytime it is referred to in a foreign language, it is referred to as a country whose justice is deeply corrupt, and today, this is very rare for a country, especially for a country in the heart of Europe. I am afraid I am not wrong if I say that we, people of politics and justice gathered here, are perceived as part of the problem rather than part of the solution by those who look at us today. I am talking about the wider audience, and I would strongly like that they could receive today the message that there is a common will and a common ambition, which goes beyond the borders of any political party, which goes beyond any differences between us, in order to act with courage in this cancerous system; but without being pessimistic, I am afraid that the opposite is true.

However, we accepted wilfully and with great pleasure to attend this forum organized by Mr. President of the Republic. We even postponed the National Conference on Justice Reform on which we are working in full coordination with the Law Commission. Because we believed and we believe that the best way to open this process is the one we are undertaking here together, under the auspices of the President of the Republic who jointly with the President of the Parliament elaborated this original idea of his to gather people of justice and turn it into a wider forum, where people of justice and people of politics try together to address the serious problems of the system. So, I thank Mr. President for this initiative and for his willingness to do this.

We cannot look at the finger, if the finger points at the moon. It is very clear to us that, more than a joint effort to address a major problem, a national common problem, the continuous effort of the last years, and especially of the last year, has been an effort in two different directions. On the one hand, it has been the effort to address with a sense of a major national emergency the serious problem of justice, and on the other hand the effort to stop this address on behalf of the Constitution, of law, of freedoms, of rights. All these are, without the slightest doubt, legitimate notions but it can’t be worse when they turn into prohibitive notions to the fundamental problem that we have today, the independence of the judiciary from the Constitution, the independence of the justice system from law, independence of the judiciary from any right and freedom of people who cannot obtain justice in courts, in a country where justice is a commodity that can be bought and not a right you are entitled to.

I want to use this occasion to say that without the slightest doubt, we all have the will to address this problem and to address it together. In addition, we are fortunate to not be alone in this difficult, extremely difficult exercise, but a necessary one in order to succeed. Because we have the precious assistance of the international community and particularly of the European Union, through a highly qualified expertise based on experience, already a treasure for us, which is the experience of countries that have emerged from the collapse of the communist empire and that, on their path towards the European Union, underwent deep reforms in their system of justice.

Of course, we have our own ideas for reform, we have our proposals on how to address the problems of the system at 360 degrees, but obviously, according to us, this is first of all a topic where politics must create conditions so that everybody can express themselves and interact, where politics must create conditions for people of the system in the first place, judges, prosecutors, lawyers, notaries, and so on to express themselves and interact. Obviously, on the other hand, the interaction of all political actors has its own importance, while the presence of international expertise is a guarantee, we believe, to bring the process back on track with will and courage.

This is our vision for the method of this reform. This cannot be a unilateral reform, but while talking about comprehensive reform we should keep in mind first of all the people of the system, and then of course, all the forces involved in the political process.

If this meeting is worth something, it is worth as a moment of expression of goodwill. But on the other hand we are all witnesses that anyone has never missed in 20 years neither the opportunity nor the words to express good will. And here we are today, at the moment in which justice and our justice system are in the worst condition ever.

Then, there is another big bitter truth that have us here together around this table, but let it be our remedy so that we can be cured and wake up, because all of us should forget that the European Union will accept Albania with this justice system. We can hide behind the Constitution and we can show to each other the laws, we can become the noisiest spokesmen of freedoms and rights of the most corrupt judges and members of the HCJ, but this will not help us be in Europe. This will only feed the barren debate among us, while the European Union will never open its doors for us if we do not prove two basic things: first, that justice is not a commodity to be bought and sold, and second, that we all are equal before the law.

And last, our majority – elected, from our point of view, from the drive to have a more just Albania – does not have an easy position in the conditions in which justice has become a vertical system on all levels, and not just the prosecutor’s office, courts or the justice system in itself. And having this mandate, we are more sensitive towards any reaction of people who are increasingly unhappy with us, first of all, about how the justice system works. I want to say very openly that we do not have an alibi and we will not look for an alibi. Without even the slightest doubt, we primarily owe to those who voted us for a more just Albania and, at the same time, we owe to other generations of this country, who do not deserve to remain outside the doors of the European Union because there is in Albania a corporation that sells and buys justice; the corporation of this country’s corrupt prosecutors and judges.

I have noticed immediate reactions to this approach and I am very sorry, but this is the bitter truth of our common country. The fact that there are exceptions must have us be at our wit’s end and not be restrained in saying this truth. The fact that there are honest prosecutors and judges, who struggle daily to respect their own selves and their profession must have us be at our wit’s end, since they are the exception that reinforces the rule. Meanwhile, the awful truth is that Albanians who cannot come into this room, Albanians who cannot have any access via mobile to any court and any judge, have no chance to have the rights on their property without paying, have no chance to have justice for their killed son or their raped daughter, but instead they are constantly killed and raped at the courts’ doors. They are being killed and raped by criminals who have been released for the second or the third time from judges who receive money. We can, we must and we will spare the life of these people, by turning into hell the lives of judges and prosecutors who have turned their profession into a business, which is the ​​lower business made today in Albania.

This is the truth, according to me.

Wishing success to this Conference, I believe that this moment, for which once again and not in a formal way I express my gratitude to the President of the Republic, is a starting point for a process. A process that will continue without delaying or saying how and why or let’s see and I don’t know what else. We should all sit together around a table and prove with our presence around the table that we are serious, regardless of who has gathered us together, regardless of who thinks what. We must end this terrible history of all these years being at least proud for trying to overturn the graph we all have in front of us. The graph of how the public perceives the justice system and of how it perceives the way the justice system functions in relation to the rights and freedoms of citizens.

Everything else in Albania with a graph has ups and downs, has bad moments and good moments and generally speaking Albania itself, although we have our own perceptions, is not what it used to be 20 years ago, in all respects, in relation to the aspirations of the people. But, if we look at people’s aspiration for European Albania and justice today, we are no longer under the dictatorship of the communist ideology, but under the dictatorship of a ruthless corruption that does not care about anyone and anything.