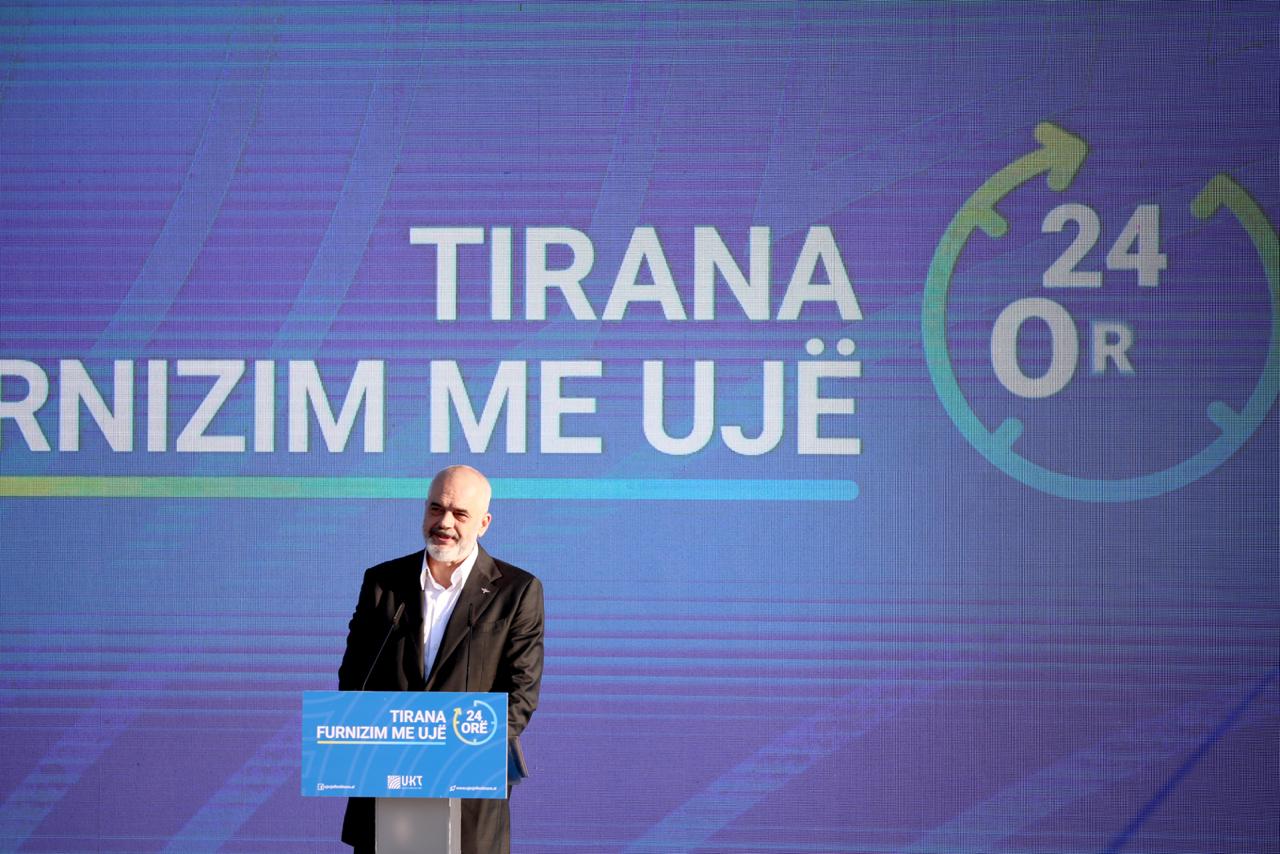 Prime Minister Edi Rama’s remarks after inspection of the dam at Bovilla reservoir:

I am pleased to be here today! I would apologize to everyone for not starting this speech with remarks about water supply, but by reminding everyone that it is crucially important for everyone to wear a face mask in indoor spaces in order to protect yourself and others around you. It is also very important for everyone not to relax and lose attention about number of fresh infections, which, as expected and as everyone sees are growing, but in the meantime, what is totally clear is that with the current new conditions we would have either to get used and coexist with this invisible enemy, or we shall all fall victims to our own stupidity. Everyone should do the fight against stupidity. The government, the state, have done, are doing and will be doing whatever it takes, but everyone should contribute to the fight against stupidity, if they don’t want to become victims of stupidity. A saying I have recently learned about has it as following: “The virus has no legs of its own, but it uses the legs of stupidity.”

So, everything was already said here, yet I believe that both Belinda and Erion agree that by taking the floor here, we have somehow taken the place of two people who are attending this event and whom I would like to specifically thank. The first one is the Italian Ambassador, whom I would like to thank, not because we are in the habit of often thanking the Ambassadors more than necessary, but because Italy, as it is the case with many other things, is related to this project.

Indeed, it was thanks to the assistance provided by the Italian government many years ago, shortly after the fall of the communist system and the emergence of the water supply problems following the immediate bombastic, demographic changes that, month after month and year after year, lead to an exponential increase in the demand for water and the number of consumers and it was an Italian company the first to lay the first stone on this project, which, as you might see, took almost 30 years to complete. I have had the privilege to meet the owner of the Italian company, a Puglia citizen who, if he were not to speak Italian, he would be a typical Vlora resident and I would be grateful to the Ambassador if he is to extend our gratitude and appreciation, for laying the first stone, but also for setting a new standard.

Things then took their course and happened what it happened. I will not go back to the project’s story, yet it is a fact that because of the demographic changes I already mentioned the water in the country’s biggest urban areas was available only seven hours a day in 2013. And this is was the case neither 700 nor 70 years ago, but exactly 7 years ago when water availability in Albania’s urban areas was seven hours a day only.

We embarked on the uphill battle to address this major problem equally concerned as it was the case with the roads network we inherited. We are used to talk a lot when it comes to the roads infrastructure, because of a frenzy propaganda, fabrications and lies and of course countless tenders and ribbons have been cut in the past. The same was the case with the water supply system projects.

When we took a stock of the water supply situation in Albania shortly after taking office, we found out that as many as 28 national strategies for water supply had been drafted between 1992 and 2013, whereas more than 70 other national strategic documents were adopted, let alone dizzying amounts of funds spent on these documents. The question where this money ended up, while no water was sent to the projected destination is actually not a topic of this today’s event.

The other person I would like to publicly thank is precisely related to the tremendous change we have brought about for no more than 18 months, because by early 2019, we increased the water availability by around four hours. Now we are currently investing in construction and rebuilding of the water supply systems in 55 urban areas out of only seven areas that received 24 hours water supply back in 2013. Indeed, a total of 62 urban areas all over Albania will receive 24 hour water supply by next September.

Of course, beyond our limits and our weakness, we haven’t had the opportunity to show and demonstrate everything we are doing, but the truth is that as many as 55 big construction sites, which will transform the lives of thousands of residents in terms of water supply, are currently opened and work is underway to make sure that all urban areas of the country, except the seven ones I already mentioned, are supplied with water 24 hours a day. In the meantime, today we are in the conditions when together with the Municipality of Tirana we are about to launch the wastewater treatment project, which has been launched many years ago, yet it was never completed. This triggered big problems with the project, it created serious problems in terms of funding, and created serious problems with the partner, the Japanese government in this case. Just imagine that the agreement with the Japanese government to support construction of the wastewater treatment plant in Tirana was reached by the Municipality of Tirana when I served as Tirana Mayor and when Bashkim Fino served as Minister, which means that a lot of time has passed since then.

This is a long time that has been wasted in all aspects and which we have inherited as a burden because it is one thing to build everything from scratch, and another to rebuild as first you have to fix what others have badly and wrongly built. It’s completely a different thing.

But what matters most is the fact that starting today we can tell Tirana citizens –  who rightly have accumulated anger because of water supply shortages, especially during the summer season – that most parts of Tirana will receive 24-hour water supply starting today.

One could ask, “Why we are here today and why are celebrating this moment since 62% of whole Tirana Municipality alone will receive 24-hour water supply?” Because this 62% figure represents a two-fold increase in water availability compared to the situation inherited situation in Tirana Municipality, where it took 4 years of sleep to put out all the bottle’s devils and practically ruin and destroy every project launched previously. And if there has ever existed a ruined company or state institution in Albania, five of them are the most favourite candidates for the non-natural disaster prize because of mismanagement by those you know who are and Tirana Water Supply entity was definitely one of the top five favourites. An enterprise degraded into a shelter of party indulgences and into a federation of guerrilla-like groups armed with monkey wrenches and equipped with elementary plumber skills just to carry out illegal connections to the water supply network to allow water thefts  and an enterprise with scandalous billing and which nobody had ever thought it would come to a point when it doesn’t only fully covers its spending, but it is also one of the reasons why the Municipality of Tirana, also with the support of the government, is now receiving financial support from the European Bank for Reconstruction and Development.

This may not sound a lot and it is probably not a lot compared to the way we want to the things to be done, yet it is extremely a lot if we are to take into account the state of the things previously. Of course, people could say “We don’t care how things used to be, but I want to know how things are.” But, it is important for people not to forget how we used to be so that they can develop a proper opinion about the present and figure out how and why we could become much better. If we are to forget where we come from then we wouldn’t know where we want to go.

In this respect, I am very pleased to add another element. Around 38% of Tirana certainly have yet to be supplied with water around the clock, yet one must not forget the fact that water availability not only in the remaining 38% of Tirana, but also in other parts of the capital that now receive 24-hour water supply used to be 5 to seven hours a day only. The today’s average of water supply is around 16 hours a day, which doesn’t necessarily mean that those I already see throwing insults via Facebook should stop doing so, because the 16-hour supply may not be a reality in certain areas. I am talking about an average of 16 hours for the entire city. This is a lot if we were to consider the situation we used to be in just few years ago, yet it is somehow adequate if compared to the trust we deserve to continue doing things much better together.

This is about an investment where it is not just a matter of how important is it from a financial point of view, but it is also very important from a technical and implementation point of view. It has not been an easy task at all and all those who have contributed to construction of this major project deserve our appreciation. As many as 250,000 residents will benefit from this investment from today on. Of course, Tirana is a much larger city, and I am fully aware of this fact, but more than 250,000 citizens and more than 10,000 students –who today are not in Tirana, but hopefully things will change soon to become better– will now receive water supply around the clock.

Many thanks to all those who have worked and made it possible for us to come here today with great relief. It has never really been a good feeling to encounter people who still did not have a normal water supply either at “Myslym Shyri” or at “Muhamed Gjollesha” street, the very street where I was born and brought up, let along in other areas. And I avail myself of this opportunity to tell everyone else who does not belong to this large group of inhabitants they too will for sure receive 24-hour water supply soon. I tell everyone in all these 55 areas that 24-hour water availability will very soon become a reality from Malësia e Madhe in north to Gjirokastra in south.

This landscape is amazing and I could have stayed longer, but I believe that we can conclude this ceremony with these words and you will not become upset if I remind you again that, when you enter indoor premises put the mask on, except when in your houses where you decide what to do for yourselves.