Llogara tunnel, a project of strategic importance for tourism in Ionian Riviera 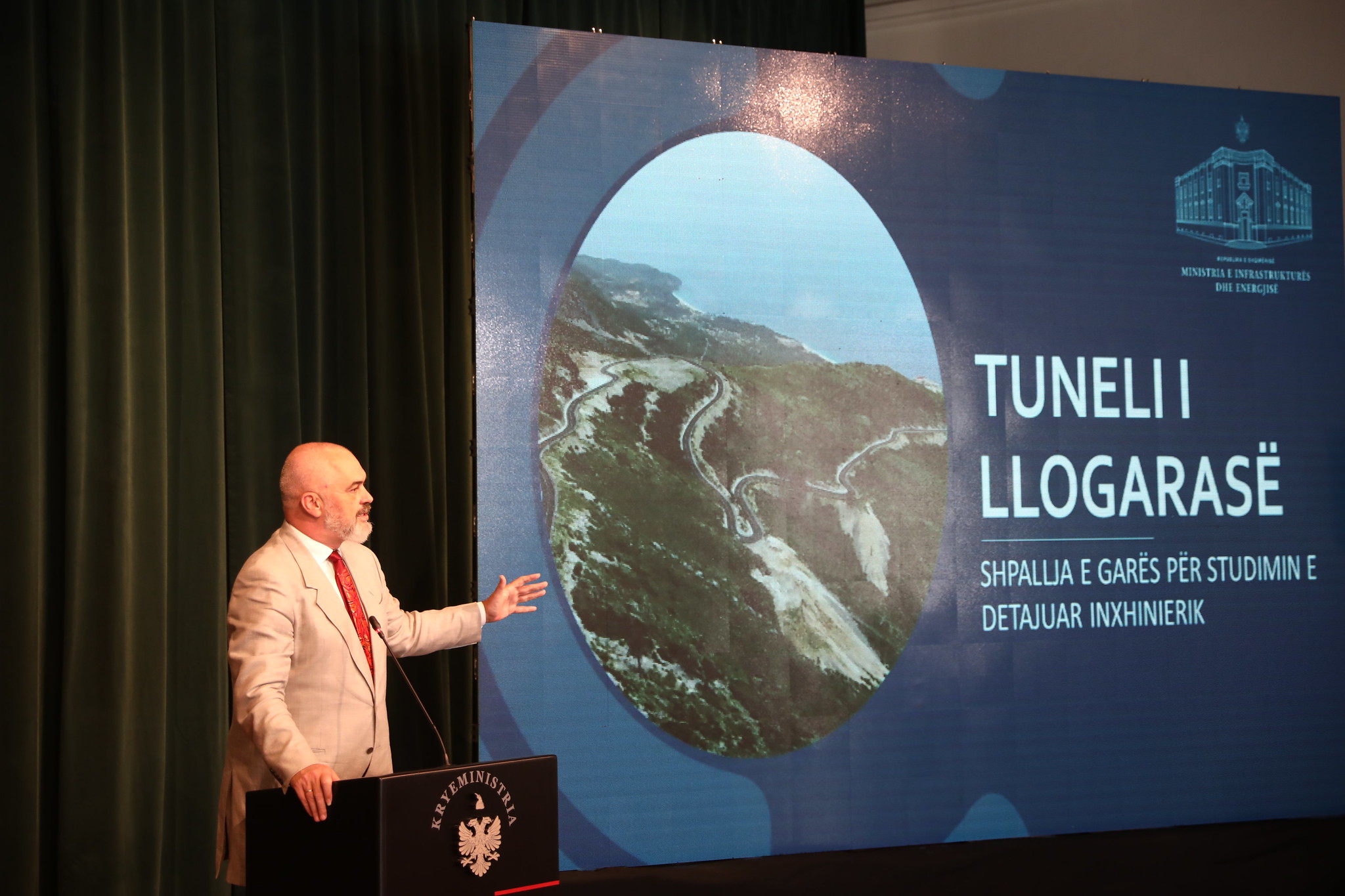 Prime Minister Edi Rama’s remarks at the launch of the international tender for the engineering project of the Llogara tunnel construction:

I am very happy to be here again to unveil another project of strategic importance, which is the Llogara Tunnel. A project and considered for decades and routinely promised in every election campaign ever since the fall of communism, yet never materialized a thousand and one reasons.

We, too, have pledged to construct the Llogara tunnel and we are today at the start of the process that will deliver on this promise.

It is about a strategic area for economic development and Albania’s image in the world. An area of high interest as it is not only about a wonderful nature and climate in the tourist season of summer, but also about an area steeped in history and cultural heritage, an undiscovered treasure now and for always.

It is about the area that is mentioned in the book by Julius Caesar, who wrote that at noon on January 5 he had landed among the rocks of coastal Akrokeraune mountain range and some dangerous areas in a place called Paleste, that is, Palase.

It is with pride that we are ready to materialize this project today, which will provide a completely different access to the area and of course will serve as a very powerful catalyst for the development of tourism throughout the Ionian Riviera.

In fact, we have seen and experienced many times in our contacts with foreign investors eager to invest in tourism, especially after we launched an aggressive legal package, precisely to attract foreign investors, how in the end the conversation always ends about the distance between the site of investment and the nearest airport. Beyond the fact that the airport closest to the area, that of Vlora airport, will be built, another airport which has been the subject of talks will be built, that of Saranda, but Llogara remains the key, because the distance extends in terms of time and difficulty down the segment that we all know, that winds to cross the mountain of Llogara.

All the analysis have been conducted for the Llogara tunnel and the Minister and her technical staff have done an impressive job measuring all the necessary parameters related to the feasibility of this project. We have explored all the possible avenues to implement the project through foreign investments or Public-Private Partnership and all parties came to conclusion that the best way is for this project to be led and carried out to the last part of it by the government itself and to be financed out of the state budget.

The project, as the Minister said, will be detailed in an open, international process selecting a foreign company with expertise in this field to be followed by another international competitive bidding for its implementation. But the first is all that matters most.

The latter is somehow less important, because we have local companies with large capacities and plenty of expertise to build complex works and the Llogara tunnel.

The important thing is to have a serious project in our hands, detailed and up to standards so that no road and work will be left unfinished as was the case when we took office, when the road construction projects were not only abandoned, but their completion was always related to some scandalous projects, which have caused us long delays, costing the state budget and the public dearly and forcing us to revise the projects themselves.

It is a true collection of documentation that I want to be arranged in an album, and I have discussed it with the Minister, to serve as an example how bad projects should not be made. An album that should be preserved in the archives of the authorities tasked with developing infrastructure and that should serve any future administration to learn how not to waste public money in infrastructure projects and how the shortest route turns out to be the longest and the most expensive one, as the traditional saying has it.

This album and the collection of unimaginable documents include examples that would deserve comedy festival prizes, with the most epic one featuring the example of a bridge, part of Qukes – Qafe Plloçe road, where the difference between the two sides of the bridge supposed to link to cliffs estimated around 17 meters. So, if the project was to complete the way it was designed, then it would have become the first bridge in the history of the planet resembling to an aqua-park structure, with everyone coming from above having to slide downward and with those down there having to drive upward without being able to drive entire uphill stretch. It would have certainly been the greatest challenge to cast doubt any advertisement for the Mercedes, Audi, Volkswagen, we see every day, Citroen, and perhaps the only cars to succeed until end being the Soviet or Chinese NATI-GAZ- cars, which are endangered species now.

I would like to point out to the fact that Llogara Tunnel is part of a mosaic, part of a strategic development vision and a series of projects designed on the basis of a vision and not on the spur of the moment of the sort: “Let’s pave a road here, or lay some gravel atop soil here and there to fool people and earn their votes, or let’s build something in this area which is a party stronghold. Let’s deviate onto another track section so that we don’t have to demolish the houses of some our party supporters and so forth and so on.” And this mosaic features all elements of an entirety that is gradually taking shape step by step. From the Vlora airport project, which is the gravity centre of this strategic vision, to the development of the coastal line of the city of Vlora , where a second segment is already being build whereas a third one, which will traverse the dividing line of the city as we know it, is set to kick off soon, with the third segment stretching to Radhime along a route track, which will assume a completely new shape as an extension of the waterfront promenade or the Lungomare, with all these projects designed to turn Radhima’s wonderful natural lowland into a space of sustainable development and give a sense of meaning to investments in the area, which, unfortunately chaotic construction and infrastructure projects have been poorly implemented over the years without any vision.

Again, focusing on this segment, which actually links this road axis with the Tunnel and which is the Orikum-Dukat road, and the investments in the coastal villages, I want to underline that we will continue supporting investment projects in the areas where a host of tourism activities take place. Intense work is underway on the development plans on several segments, starting with a project that is designed to ultimately tackle urban planning issues along entire Orikum coast with a waterfront promenade and a road in compliance with the standards we know how to set. The road will stretch down to Borsh. In the meantime, work is going on to construct the waterfront promenade in Saranda and further on we will carry on with the work to design a project for Ksamil area to provide a complete connectivity in this whole area.

I can’t help but also mention the Vlora bypass project with the road paving already underway following a long and infinite odyssey of delays again due to the poorly designed project. A project envisioning the road to run through the cemetery ground, suggesting that road to development had to traverse over the bodies of the dead. Indeed, if the family members were to gather and commemorate their beloved ones, based on that very project, they would have had to use a convoy of off-road cars and then stop somewhere along the highway, right where the grave of their beloved one was supposed to be found under the pavement. I am saying all these because it took an entire process of redesigning and expropriation procedures before changing the road’s track.

With the Fier bypass road, another completed project following an odyssey of long delays and after a new project designed to turn into the crown jewel of all these consecutive projects set to begin in a very near future, including the Adriatic-Ionian corridor linking Milot and Fier and stretching through Thumane and Rrogozhina to connect then with Shengjin-Velipoje road along the most panoramic road along Adriatic coast further stretching to the neighbouring Montenegro, I believe we will take an epochal leap for tourist Albania and the local economy of all these territories. We are talking about employment in tourism sector, yet suffice it to cite a figure earlier provided by the Minister, who said that Llogara tunnel project will employ at least 11,000 people, to figure out how important infrastructural access is to job creation and not just to developing conditions for faster and safer driving.

Last but not least is the road safety. All these road infrastructure projects are built according to completely different standards applied previously in road construction, as they are now being built up to the highest safety standards. We have experienced a painful failure in developing an important foreign investment that was meant to provide direct connection with the Ionian Riviera and the investor’s strongest argument to turn down the project was Llogara’s steep escarpment. My grandfather used to win against the drivers of the embassies in the rallies along the winding uphill to Llogara, yet the existing road is somehow built for the kind of drivers who wish to find out how long they will live, and not for the visitors who come to relax and cherish positive energies in their lives.

I would like to tell primarily all local residents in the area, Vlora citizens and entire Vlora and Saranda districts, as well as all Albanian citizens that definitely a lot remains to be done for Vlora and the Ionian coast, yet it would take just a look backwards to recall that although today we talk about complex engineering and financial projects, it was not 100, but just 5 to 6 years, when people used to enter secretly Vlora, i.e. a city that was rightly seen as a gateway to Albania, where leading history figures used to go back and forth, including Julius Caesar, and it was a city that was secretly accessed in a kind of a psychology of illegality and one had to drive through a bumpy road and heave a sigh of relief at the sight of lights thinking he escaped this time too.

Vlora and that entire area have now become a major tourist destination.

The once-abandoned villages in the country’s south are being revived and will soon become true tourist resorts meting high tourism standards as a result of the transformation that has taken place and thanks to the grace and beauty that have been restored. This entire corridor, currently being built step by step, will attract many more visitors and tourists, primarily visitors from Kosovo, who for a good reason name their daughters after the city of Vlora. It will now be much easier for them to consider and take into account the fact that in addition to the immediate beach destinations on Adriatic coast there is another equally inviting and popular on the Ionian coast. But, given the road infrastructure we inherit it would take two-day drive for a Prishtina citizen to travel to the Ionian coast, two days to drive back to Prishtina and two more days to recover from the long drive.