Total repel of cannabis growers and seizure of criminal assets 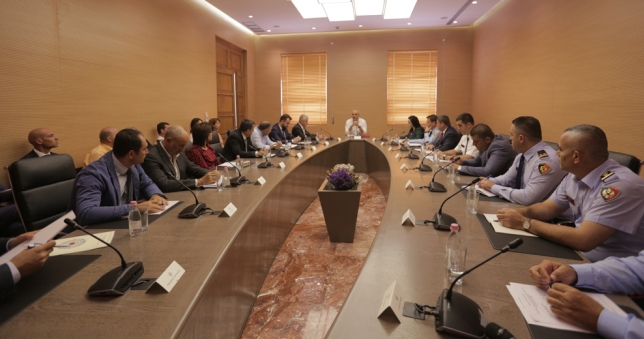 Prime Minister Edi Rama’s Speech at the Reporting Meeting of the Situation Operational Office of the Task Force on the Implementation of the National Plan for the Prevention of Cannabis Cultivation and Trafficking:

The panorama of the results achieved is clear. The ambitious objective to end the cultivation of cannabis in the territory of the Republic of Albania, a phenomenon that has stained our country, is towards full achievement. If we succeed in achieving this objective in the way we have set it, from the point of view of cleansing the territory from cannabis feuds and growers, we will have to consider the other side of the coin more thoroughly in the sense of identification, detention and punishment of criminal elements that have benefited large amounts of money and possess criminal assets in a totally illegal manner.

The State Police deserves a special appreciation in this process, considering that despite the increased burden of the great influx of tourists but also the phenomenon of arsons, it has been persistent on the front of the fight against cultivation and cannabis growers. It is clear that despite the special effort of the State Police, there are still local authorities, prefects, certain mayors or administrative units that have not kept up with this challenge. And as we have pointed out since the very beginning, when we launched the major national plan for cannabis eradication, it is not just the challenge of the State Police, but a total challenge of all institutions and law enforcement agencies, even of society.

Even the presence of the Director of the General Directorate of Money Laundering Prevention at this meeting is not incidental, but it expresses the necessity for the fight on this front to escalate towards criminal elements, crime money and criminal assets.

It is time for the State Police to prepare for a major national control of the elements of criminal records throughout the country, which are symbols of these cannabis cultivation feuds, but not only. They have the status of the area’s bully, and in my view they’re easily identifiable, easily criminality prosecutable and easily punishable in terms of the assets they possess.

It suffices that this operation, which should be carefully prepared and should not become an obstacle to the free movement of tourists at this peak stage of the tourist season, be implemented immediately once it finishes or as soon as the flow of tourists decreases, by checking the vehicles of these characters. It suffices that these elements of major concern to communities, which are very disturbing to order and security as they embody the impunity of more than a quarter of a century, be held accountable to justify the immense values of their vehicles and assets, in order to have transparency. And based on this transparency, they will answer before the prosecution and the court, where appropriate.

It is time to clean Albania not only from cannabis, but also from these live microbes that seriously contaminate the organism of our communities, seriously threaten the safety of the average people of this country, their family members, residents throughout the country where these Cannabis feuds are the most meaningful expression of the necessity to link their disappearance with the merciless strike of these criminal elements.

State Police has the right information. The State Police memory is sufficiently rich with names, deeds, connections, movements of these types of microbes, to make possible a super-successful operation in this regard, to give a very clear message to the communities, to the average people, that the time when the state was only an alternative to their security and when they should seek security by paying rent as a business, or by being subject to these elements, has ended once and for all.

Also, I want to commend a very important moral aspect of this entire operation, the striking of the elements within the State Police that are related to this activity. This should be extended further, by striking the elements within the State Police that are connected, or worse, subject to the above mentioned elements, to the feudal lords in the shadow, who disturb our public environment and community life by carrying the gloomy passport of criminal acts, and being around as a shadow of threat to public peace, to the peace of families, businesses and other people living in this country, who respect the law and respect the community.

I believe that after another period of time, I think in the last 10 days of the month, it would be worth having another update with all the results gathered so far, and for which all of you deserve the appreciation and gratitude mine both and of the Albanian government.